Not About The Kindle Controversy

I don’t want to get into a brouhaha over Amazon’s Kindle and whether it’s a swindle or a savior or Beelzebub.  (Although the talking version seems to need elocution lessons.) 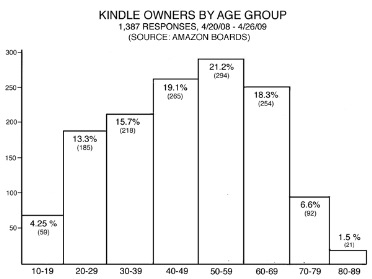 70 percent of Kindle owners over 40?
by David Carnoy

We can't call this the most scientific poll ever taken, but it's probably a good indicator of the Kindle's age demographic. If you add it all up, over half the owners are over 50 and 70 percent are over 40.

That might be news to most folks – but not to readers of my book and this blog.  Pulled from the cover of the 1st edition (March, 2005):

The newest Kindle is bigger and (of course) better:

The device, called the Kindle DX (for deluxe), has a screen two and a half times the size of those on the two older versions of the Kindle, which were aimed primarily at displaying book pages.

Do you think Amazon and their ad agency will be doggedly targeting Baby Boomers with their campaign?

(As I fiddled with this post, a really good idea for a TV spot burst into this noggin of mine.  When we finally see a campaign for Kindle DX, I’ll tell you what it was.  Or maybe I’ll drive down to Seattle and harangue Jeff Bezos …)