Marketing to the Ageing Consumer

New book, a good one:

Marketing to the Ageing Consumer As the populations of Europe and the US, soon to be followed by China, grow older, it is vital that marketers understand the effects of physiological ageing and their impact on marketing.

Dick and Kim have put together a concise, brimming-with-info overview of what people 50-70+ are and will be experiencing physically and psychologically (with a larger nod to the former) – and why this knowledge is critical to companies, organizations, governments.

It’s an easy though at times startling read, backed up with clear, to the point  graphs and charts (even I could comprehend most of them).

The message: Age-Friendly doesn’t begin and end with advertising and marketing. The initial product development, packaging, and point-of-purchase experience is likewise crucial and often ignored.

An example not in the book: Six or so years ago,  we were overwhelmed by a stunning international campaign targeting 50+ women with a line of beauty products – skin and face moisturizers, a shampoo, conditioner, etc.  Truly revolutionary advertising. The bottles flew off the shelves.

But something happened at home. The product containers were pretty much the same – a murky maroon with flaky white fonts, leading and kerning so bunched that for older eyes all was a blur. Women would reach for a specific bottle in the bath or at the vanity, and had to grab their glasses to read the label. Try that in the shower.

A great ad campaign will make a bad product fail faster. It will get more people to know it's bad.
– Bill Bernbach

But it wasn’t the product, it was the  packaging that held back this beauty line from universal, everlasting success.

Congrats on this, Gents.

A Guide for the Perplexed

Even a lowly advertising creative-author-consultant-speaker-gadfly can’t always keep up with everything said about him on the web.

Something I missed from 2006 - a review of my 2005 book in a report by The Institute For The Future’s Richard Adler for AARP:

Aging Baby Boomers: A Guide for the Perplexed (PDF)
Nyren indicts the advertising industry for remaining fixated on allure of the “youth culture” and losing interest in Boomers, even though they still represent an extremely large and dynamic market.

The industry is still fixated…

A belated thanks, Richard!

NostraChuckus, that famed Soothsayer and advertising gadfly who’s been startling the world for years with his mundane prognostications, sometimes is surprised when his predictions materialize:

I won’t be getting one (a tablet) soon, however.  I’ll wait for the model that won’t shatter when you drop it, and can be rolled up to swat flies.

He really didn’t mean it when he foretold it, but the mystikal cosmos ofttimes plays eerie tricks on him:

Now, flexible 'paper tablet' that can be rolled up
… Researchers have developed a revolutionary tablet screen as thin as a sheet of paper that can be twisted and dropped without damage - and it could replace your laptop within five years. 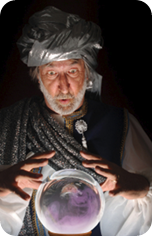 Stay tuned for more shocking revelations from NostraChuckus, if his feeble heart is able to survive them.

Moses and the pharmaceutical industry once had exclusive dibs on this word.  Nowadays, tablet commonly refers to a specific type of computer doodad technology.

Anacin
Not quite as ubiquitous as The Ten Commandments or Anacin, some believe they will be soon. Perhaps tablets shall impart wisdom, perhaps relieve your headache. My guess is that they may impart a bit of wisdom while giving you a headache.

In another cranny of  virtual etherland, I stumbled upon a silly jumble of 2013 predictions gathered from social media gurus. A not completely silly one caught my eye:

#3: We’ll See Media as Either Active or Passive

I believe that we will stop seeing media as social and start thinking about our media as being either active or passive. This will happen in two stages.

Stage one is the consumer. When are consumers active or passive with their media? When are they passively watching a TV show or actively taking part on Twitter?

And there’s the ‘actively taking part on Twitter’ part:

Twitter & Advertising (2012)
… The mobile/social media soothsayers will have you believe that there is this unknown, magical mode of persuasion that has never been thought of before – and will reveal itself any day now.

I guess what NostraChuckus really predicts is predict what futurists will predict in five or so years.

Back to tablets and whatnot:

If you’re using a tablet for a passive activity like reading a magazine – the advertisements should be passive, engaging.  I’m not sure how they’ll play vs. a print mag – and that’s the big question.  But they will have to draw you in viscerally – not with lots of annoying noise: 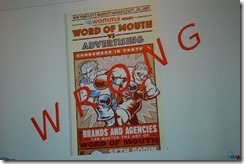 That social media guru is on the right track.  He simply needs to read some of these:

I also have a Windows Phone that’s almost an 8 – and from what the geek press tells me I’m impatiently waiting for an upgrade that’ll make it not quite Windows 8, though close enough.

These posts are composed with Microsoft Live Writer, a pretty good program.

But don’t think I’m a Microsoft groupie – my browser is Firefox, my cloudy email Google. Redmond screwed up a bit with their new OS. Lots of folks aren’t happy with the Start Screen. You can do your own binging about the brouhaha. It has to do with the touch interface when there’s no touch. The OS works flawlessly on phones and tablets, not so well on desktops and laptops with regular ol’ monitors and screens. Third-party workarounds are available – and I use them.

If I ever get a tablet or touchscreen laptop they’ll probably be Windows, and I’ll probably like them.

My HTC Trophy is simple, easy to figure out, easy to use, easy on the eyes.

Win 8 phones, tablets, and desktops are potent technologies for Baby Boomers, but you’d never know it by the ads and commercials.  The products are positioned as toys, not elegant and productive tools:

Microsoft would be wise to fashion some advertising  for Boomers and older (and that tiny niche market known as the business industry).  Less flash, more substance. Once you get the hang of it, “Metro” isn’t that intimidating.  The email app is big and gorgeous, but lacks features at the moment. The weather app is great, the pic apps easy to utilize.  Thousands of other apps are likewise graphically pleasing and accessible.  My guess is that the next handful of upgrades will be all about making the OS more user-friendly.

And I think most people will be able to switch between a mouse/keyboard OS for serious business stuff and touch-based operating systems for accessibility and fun.

Microsoft doesn’t seem to understand this:

On a traditional PC, Windows 8 Metro is a solution looking for a problem
by Brooke Crothers
… Of course if you're one of the relative few who have a tablet like the Samsung slate or Microsoft's Surface or a touch-screen laptop like Acer's Aspire S7, yeah, then Metro is front and center, as it should be.

But on a traditional laptop it's problematic. 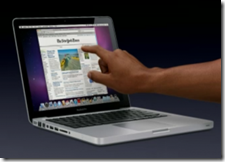 Ever heard of Gorilla Arm?  Read about it.  Boomers and older have enough trouble with arms and hands and fingers.  And shoulders.  And necks.  On a phone or tablet, touch is great.  Not so with desktops and laptops.

Microsoft needs to upgrade the Windows 8 Start Screen with a few more navigational buttons, and in advertising spots show people being productive with mice, keyboards, and touchpads.

Call me an old fuddy-duddy, but I’m not particularly interested in B-Boying with my Surface.  (Well, maybe once in awhile.)

Two good pieces from The Wall Street Journal and Forbes:

Microsoft Could Change The World With Windows 8
12 Jan 2013|Jonathan Salem Baskin
Even a budget north of $1 billion hasn’t changed the fact that they have expertly told us nothing compelling about what they’re selling.