Writing about getting older, especially after you’ve hit fifty or thereabouts, has become quite an industry.  The subject now rivals books on Gardening, Beauty, Sex, Yoga, Health, Religion, Cable-TV Inspired Politics, and Self Help. You could blanket Yasgur’s Farm with books about Sixty being the new Forty, Sixty being the new Sixty, or Sixty simply being Sixty.

There are silly ones, serious ones, worrisome ones, fascinating ones, funny ones.

Sometimes I think we should have another cultural revolution like we did in The Sixties.  Instead of burning draft cards and bras, we should burn these books.  You can even toss mine into the fire if you want.

Although there is one I happily devoured recently that pretty much summed it up for me – along with being humorous, serious, full of pungent truisms, and wildly entertaining.  You should flip through it before setting it aflame: 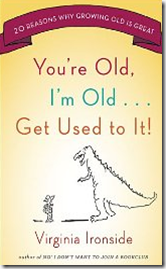 You're Old, I'm Old . . . Get Used to It! Twenty Reasons Why Growing Old Is Great
by Virginia Ironside
No matter what they say, sixty will never be the new forty. But sixty- five-year-old British writer Virginia Ironside is determined to convince people that getting old is not so bad-even for a Baby Boomer who interviewed the Rolling Stones and Jimi Hendrix early in her career.

Among scores of other concerns, Ms. Ironside nails digestion and death.  She gives only lip service to one of my favorite subjects – drooling.  But I’ve covered that topic in its entirety.

Virginia’s take on being a modern-day grandparent is the best I’ve read.  There’s an abridged version on the web somewhere, but I’m not linking to it because you really should savor the whole chapter.

I’ll allow you to read this, however:

Introduction to You’re Old, I’m Old … Get Used to It!

And watch this – culled from her one-woman show The Virginia Monologues: 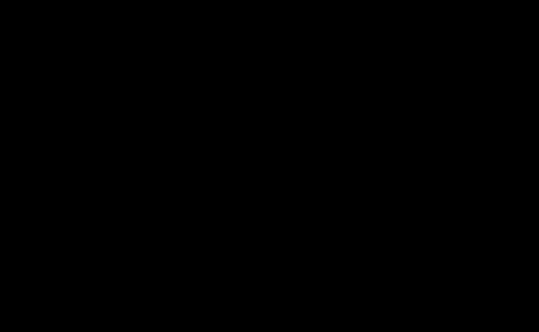 …I’d deem it an honor to spend ‘a couple of minutes’ with Ms. VI…

So grab the book, step away from the bonfire, just far enough so you’ll have enough light to read, laugh out loud dozens of times – and when you’re done maybe you should save this one from the flames.

The danger of and possible swan song of WOMM: People will eventually see shills coming, will recognize shill-talk, shill blogs – and ignore it all.

And there have been so many posts I can’t even link to them all.

If you don’t know what WOMM is, here’s a link to a methodical and rigorous explanation:

Not too long ago there was a piece in the NYT:

Time To Duct-Tape WOMM?
A recent ad posted by “Katmoney” … offered to write convincing negative reviews posted to a Yelp page of your choosing.

Now there’s another one:

In a Race to Out-Rave, 5-Star Web Reviews Go for $5
By DAVID STREITFELD
In tens of millions of reviews on Web sites like Amazon.com, Citysearch, TripAdvisor and Yelp, new books are better than Tolstoy, restaurants are undiscovered gems and hotels surpass the Ritz.

And I thought Brand Ambassadors and Citizen Marketers were the bee’s knees.

Determining the number of fake reviews on the Web is difficult. But it is enough of a problem to attract a team of Cornell researchers, who recently published a paper about creating a computer algorithm for detecting fake reviewers.

And the NYT printed this:

Is That Review a Fake?

As usual, I don’t get it.  I’m not behind the curve, or ahead of it–just simply tumbling helplessly inside it.

Why would you publish and promote the algorithm?  Wouldn’t that tip off all those wonderful Brand Ambassadors and Citizen Marketers?  Doesn’t Google, for

example, keep their perpetually morphing search algorithm a secret?  Aren’t there computer geniuses who spend their lives trying to figure it out?

I’d gladly pay anybody a fiver to give this post five stars – but I’m not sure where to put the stars.  Maybe on my forehead.

This ‘n that, here ‘n there again.

Think of this post as a bunch of beefy tweets.

Interesting for me to wake up in the morning, make some coffee, sit down at my computer, and read exactly what I've been saying since 2003 (actually a bit longer) in a book, this blog, my speaking/consulting here and in Europe.  As if it's all new.

For any card-carrying baby boomer, the mere mention of Eddie Haskell (Ken Osmond) takes us back to our formative years. Growing up, we took St. Joseph low dose aspirin when we were under the weather.

Brent Green unpacks that one.

Deborah L. Jacobs
After 23 years of contributing articles to many different publications, I have decided to make my journalistic home at Forbes.

Is age the most valuable asset in PR?
Many talk about gender discrimination in the workplace, but is age discrimination on the rise? If so, companies and agencies bypassing older applicants for younger ones are making a grave mistake…

100-Year-Olds Just as Unhealthy as the Rest of Us

For my whole life I’ve tried everything I could to die young. Nothing has worked so far. Now I know why.

Dick Stroud points us to a newsletter by Web usability consultant Jakob Nielsen:

How do you design mobile applications for older people? With great care.

The Jakob Nielsen newsletter has a very useful article about the challenges of designing applications for small screens.

His “bottom line” message is that: “Mobile devices require a tight focus in content presentation, with the first screen limited to only the most essential information.”

(Unless you have very slippery fingers…)

Dr. Nielsen backs up what I’ve been saying for over a year about advertising and smartphones:

Foretellings (01 May 2010)
The more people use smartphones, the less they’ll tolerate silly graphical doodads mucking up their small  screens.

The Pew report … found that 87 percent of the smartphone owners surveyed used their device to access the Web or e-mail at least once a day. And 25 percent said they go online on their smartphone more than they do with a regular computer…

Just A Few Gazillion Dollars
… The death knell for the personal computer will sound like: ‘Mainly I use my phone/pad, but I still use my PC to write long e-mails and documents.’ Most people aren’t there yet, but that’s where we’re headed.

Consumers weren’t motivated by display ads, as evidenced by the share of the online audience that bothered to click on them.

Not everyone loves Jakob Nielsen:

Nielsen has been criticized by some graphic designers for failing to balance the importance of other user experience considerations such as eye appeal.

Goodbye, Fancy-Schmancy Web Sites
Online, content is a tool. We use it. It's not passive and neither are we. And if its design hinders that use, we get irritable.

There is no way anybody, no matter what age, will put up with graphic gizmo advertising on smartphones.

Don’t Call Them Old (Is Old)

I saw this headline floating on my monitor, and clicked:

Many baby boomers are in their 60s but not ready to retire or seek services for senior citizens … many defiant baby boomers apparently prefer to believe in encores rather than final acts. For them, aging and retirement have become somewhat problematic in a variety of ways…

Looked familiar.  At least the headline.  I dug into my dusty ethereal drawers and found this from almost eight years ago:

Chuck Nyren is a leading creative consultant, copywriter, and columnist, who focuses on baby boomer demography, sociology and culture.
"Not wanting to get/be/look older isn't anything new. However, baby boomers will do it a bit differently," he said. "Looking and being healthy will be more important than toupees and botox. While botox and the like are getting a lot of press, I'm guessing only a small percentage of people are using stuff like that. Being able to ride a bike, play tennis and garden will be more important than looking good and feeling (bad)."