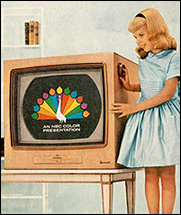 That’s my prediction. Advertisers will finally follow simple common sense, something a certain seer has been urging for years:

… In real life, TV commands 58% active viewing, compared to only 31% for YouTube and just 4% for Facebook … TV’s relaxed, ‘lean-back’ viewing environment is not to be confused with passive ad attention …

Now factor in the size of smartphones vs. the size of televisions. An advertisement you hold in your hand is about as big as a large piece of confetti. And I’ve noticed that often they scurry around like tiny bedbugs. Sometimes I try to squash them.

NostraChuckus’ thoughts through the years:

Foretellings
… That silly retronym “traditional advertising” will remain the premiere force for introducing people to a product or service, along with sustaining its shelf life. Television, radio, and billboard ads will continue to have the visceral power they’ve always had – if only for their sheer size, simplicity, and cutting-edge audio/visual qualities ...

… Baby boomers also had a highly negative response to mobile ads ... Fewer than 8% said they were likely to purchase a product advertised on their mobile phone … Overall, just 5.2% were interested in receiving ads on their phone at all …

NostraChuckus’ Crystal Ball of Common Sense is getting hazy now…