It was way back in 2007 when I blogged a bit about smartphones vs. simple cell phones, listing “The Good” and “The Bad”:

The real issue:
Marketers assuming that if you're over fifty you're automatically a member of one and only one age demographic - all with the same needs and wants.

It’s not a question of dumbing down technology for Baby Boomers (we invented and were the first users of most of this stuff) – but more a question of universal design, easy-to-handle knobs and controls, bigger fonts and correct color contrasts…

A few experts on this subject:

Smartphones & Usability
Jakob Nielsen:
How do you design mobile applications for older people? With great care.

Fat fingers are no barrier to using the iPhone
By Dick Stroud
The first video is from the Ellen DeGeneres show. It is an amusing parody of the Apple's iPhone 4 ad. I have to say I think it contains a smidgen of truth.

So four years later it’s nice to find another expert with a practical list of smartphone features he uses regularly:

Smartphone Features for Baby Boomers
by Robert Fowler
… I found my smartphone easy to use and now understand it’s features and how it will help me in my daily life. I think Boomers will continue to discover the benefits of smartphones  and find them useful like I did.  As we get older using technology will make life easier and more manageable.

For all smartphone designers to remember: an easy-to-grip handle on a utensil is not ‘dumbing down’.

Understanding the Boomers and Beyond Market

CD Publications has a long history of excellent 50+ Marketing books, pamphlets and newsletters.  77 Truths About Marketing To The 50+ Consumer by Kurt Medina and John Migliaccio was published over a decade ago, and updated in 2009.  Selling To Seniors has been around for I don’t know how long, and yours truly has been featured in it I don’t know how many times. 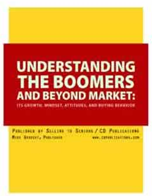 Understanding the Boomers and Beyond Market
Publisher: Mike Gerecht Senior Editor:
Dr. Leslie M. Harris
This new Special Report, published by Selling to Seniors – the 50+ Marketing Report,  zeros in on the aging Baby Boomer market and how it differs significantly from both older and younger generations … The book includes essays from some of the world's leading experts on the 50+ market, including:  Adriane Berg, Brent Bouchez, Mark Gaylor, Gary Geyer, Steve Howard, Paul Johnson, Gerry Linda, Theodore Reed, Jerry Shereshewsky, Jane Singer and Dick Stroud, as well as Dr. Harris.

In the first chapter by Gerry Linda, there is discussion about The Nyren Hypothesis – something I never knew existed. (Then again, hypotheses may not exist, since they are by definition hypothetical.)  If I told you what it was, I’d have to defend it with footnotes and citations and all sorts of academic rigamarole.  You’ll just have to read the book.

And do.  Understanding the Boomers and Beyond Market is full of outstanding, easily digestible, practical marketing advice.

When weather permits, I peddle up and down a popular bike trail here in The Great Northwest – on my big-seat, balloon-wheel cruiser.  Usually I pass by folks pushing, pulling, or tugging all sorts of wild contraptions.  Often they’re strapped to these medieval torture devices.

Those measly trike things unnerve me the most.  Put someone on one, and they remind me of cartoon velociraptors swerving and scurrying, looking for lunch.

Awhile back I received a phone call from a gentleman who’d designed a clever piece of exercise/sporting equipment for rollicking and rolling on trails. It was an adaptation of another clever, successful product, making a certain popular activity much safer – and more fun.  He told me the URL, I punched it up, and immediately knew his offering had potential.  Lots of potential.

I was preparing for an overseas gig, said I liked his product, and would contact him when I returned.

A week later I punched up the URL and took a look around.  I still loved the product, but there were major issues – both with the design and the positioning:

I emailed the inventor/entrepreneur, telling him that in the next few days was going to put together a memo about his product, tell him what I think he needed to do and what I could do for him.

I didn't request anything from you … I didn't hire you … I just finished professional videos which are now being edited.

Not sure how to respond (if at all), I thought about the fact that most entrepreneurs – at least ones with an idea for a product or service – might not be businesspeople, might be a bit naïve and paranoid.  As understanding as I could be, I explained my intentions:

Of course you didn’t hire me. I was going to ‘pitch’ you at no cost.

How about this – do what you’re doing and have fun and good luck.  But if it isn’t going as planned in a few months, contact me. I’ll put together the pitch then.

I never expected to hear from him again – and never did.  A month later I punched up his web site.  The ‘professional video’ was anything but.  Some lady quacked away about the product – and there was no wind shield for the microphone.  Just standing there, it sounded like she was reporting from the scene of a hurricane.

And the rather dismal-looking picture of the product languishes on the web site.  Alexa global ranking: 16,104,259.  No U.S. ranking because when one or two or less people visit a site per month, Alexa ignores it.

Lessons for entrepreneurs?  Due Diligence, of course.  But not everybody is out to steal your your money with promises of fortunes with their marketing/advertising prowess.  I’m not the only one who could’ve helped this fellow, put him on the right track.

From my business web site:

I have an egalitarian bent and enjoy slinging sentences for small start-ups and entrepreneurs.

So I get a lot of email from entrepreneurs and folks starting their own businesses.  Some emails are ignored (MLM, vitamins, supplements, etc.), some are answered and we might chat for a bit on the phone as I try to point them in the right direction, some become clients, some don’t.

I’ve found that there are two mistakes made by almost every entrepreneur targeting this unwieldy, diverse market:

I’ll write about #1 in future posts.  Let me take on #2 first (not that I haven’t been screaming about it for years).

Some posts you should skim before I prattle on:

Click this ad. 0.051% do.
… a tiny fraction of people ever click on an ad. In fact, 99% of stable cookies examined never click on an ad … optimization of campaigns to achieve higher CTR may in fact be reducing brand ROI.

…Certain segments in the online space were more sharply impacted during the reported period. Display ads and sponsorships were down 26% and 35%, respectively, in customer engagement.

…With the exception of the workplace, smartphones (along with iPads and Kindles or something like them) might just make desktops and laptops and the web as we know it obsolete.  If ‘being connected’ mostly means communicating with friends, doing simple search, reading the news - then all that’s really needed is a smartphone.

A ubiquitous phrase (I’ve used it myself):  You have to cut through the clutter.

Actually, the reverse is true when uploading a product/service web site.  A better hackneyed analogy: Think about traveling along a major highway in the desert and seeing a dirt road leading to what appears to be nowhere.  Now imagine travelling ten miles up this empty road and finding a big billboard for your product/service.  That’s what a consumer-targeted web site really is.

You can put a small billboard on the main highway telling people to turn off and travel ten miles to see your big billboard – but how many people will do that?

Alexa is a free service (or partially free).  I have their toolbar on my browser.  It’s fascinating to know what a web page rank is:

Ready to spend your marketing nickels or your gazillions on Banner Ads or coercing members to be ‘fans’ on these sites?

I had a meeting with an advertising agency a few months ago.  Their client is a medium-sized financial planning company.  They hired a comic actor (semi-well known) and made a few videos with him, hoping they’d ‘go viral’ or something.  This was not a TV campaign, and I wondered why.  “We’re going to have a Facebook page!” the account exec said, with a big, excited smile.  They already had some banner ads floating around on a few financial web sites.

Here is the Alexa ranking for this web-only campaign:

There isn’t a U.S. Ranking because it’s so infinitesimal you can’t measure it.

And this is not a small start-up.

Part III will be about an interesting piece of sporting equipment that is being positioned as a medical device.  Its Alexa global ranking at the moment is 16,114,472.