Disclaimer: Nothing much about advertising.

I just can’t get all hot ’n bothered by all this pro/anti Boomer stuff.

I remember not caring about it and making fun of it almost twenty-five years ago:

… Here's a kid sick of hearing about Boomers -- and I don't blame him … When I was his age all I ever heard about was the Depression and WWII. What a bore.

Sixteen years ago this was published: 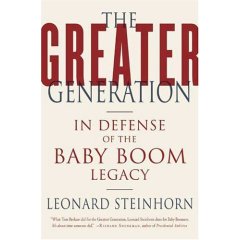 The Greater Generation: In Defense of the Baby Boom Legacy
by Leonard Steinhorn
It's fashionable to mock Boomers as self-involved and materialistic. But what really is the true legacy of the Boomers?

Professor Steinhorn was featured in a Washington Post Magazine piece in January:

He wrote the book on boomers, and he thinks the Gen Z rap against them isn’t quite OK
By Graham Vyse

… As a millennial raised by a pair of liberal boomers, I’m instinctively sympathetic to Steinhorn’s case. I’m close to my parents, and I share their values, so it made sense when Steinhorn told me there’s much less of a cultural “generation gap” between boomers and younger cohorts than between boomers and their parents.

Now David Cravit is tossing up videos about it all. He does a fine job walking us through the history of Boomers, demolishing dumb myths:

The Unapologetic Boomer
... If you're a Baby Boomer tired of being blamed for everything, this is your place. I offer a blunt, but evidence-based, argument for why the Boomers have nothing to apologize for.

And Ashton Applewhite is pulverizing parallel myths about Ageism:

This Chair Rocks
… From childhood on, we’re barraged by messages that it’s sad to be old. That wrinkles are embarrassing, and old people useless …

May I mention that yours truly is mentioned in Ms. Applewhite’s book?

The Chuck is Very Cool and Cutting-Edge and a Very Important Person Post
… Ashton Applewhite, a leading activist and shaker-upper in the You’re-An-Asshole-If-You’re-Ageist world, quoted me in her book This Chair Rocks: A Manifesto Against Ageism …

My takes on these subjects are usually tongue-in-cheek. A few years ago a silly book came out and I had fun goofing on it:

And there are other underlying reasons why my generation is the tops:

People are always coming up to me and asking, “Chuck, why are Baby Boomers so wonderful?”
How rare it is to have an infinite number of correct answers to a single question! One of my standard replies: It has to do with our alimentary intake during adolescence …