It’s still March and already NostraChuckus’ Crystal Ball of Common Sense has spot-on prognosticated what would come true in 2018:

09 January 2018
The Year of Big
That’s my prediction. Advertisers will finally follow simple common sense, something a certain seer has been urging for years …  An advertisement you hold in your hand is about as big as a large piece of confetti…

Proof of NostraChuckus’ uncanny predictive powers of  the mundane and the obvious:

Advanced Ad 2018: Attribution Data Points to TV Ads Driving More Sales
3/26/2018
by Jon Lafayette
… TV advertising works, and marketers should buy more of it, according to an executive at a company specializing in attribution measurement …

by Samuel Scott
… Marketers think that online video and social media are the second- and third-best mediums for brand building. But in contrast, Ebiquity found that the top six mediums are actually traditional ones that are always proclaimed as “dead”.

This isn’t the most exciting video in the world, but it’s short and informative. Stick with it and you’ll learn a lot about the silliness of itsy-bitsy advertising:

NostraChuckus’ Crystal Ball of Common Sense is getting hazy now…

Mark Ritson is a fun fellow. And a troublemaker. I like him.

I don’t follow him on Twitter (actually, I do now, just clicked follow as I write this) but I really don’t have to follow him. His posts are always mucking up my feed because over a dozen people I do follow retweet him. Sometimes there are four or five retweets almost in a row of the same Ritson tweet.

Now there’ll be one more.

Dick Stroud tossed up a video of a recent Ritson talk:

Tuesday, March 20, 2018
Is marketing in such a bad state as depicted by Mark Ritson - probably
… When reading about the exploits of marketers I spend more and more of my time shaking my head in disbelief. How can they be so dumb?

At 2:20 Mark goes on a waggish rant about the death of. Everything in marketing and advertising is dead and replaced by ……?

I’ve laughed about this for years. A few moldy posts:

01 May 2010
Foretellings
… Television, print, radio, and billboard ads will continue to have the visceral power they’ve always had – if only for their sheer size, simplicity, and cutting-edge audio/visual qualities.

18 May 2010
Advertising Is Dead. Again. (Part I)
It’s official.  The last sixty-four years of advertising has been declared ‘ineffectual’.

19 May 2010
Advertising Is Dead. Again. (Part II)
But … what about social media marketing?  That’s the new thing, what everyone’s talking about, the only way to go nowadays. It’s the greatest thing since the telephone.

At 12:18 in the video, Mark talks about one of my favorite subjects (because it doesn’t exist), Brand Purpose. He does a funny bit where he asks the audience to match the brand purpose with the product/company.  I did pretty much the same thing a decade or so ago when talking about Baby Boomer sites and their mission statements:

27 August 2009
Advertising to Baby Boomers Can Be Tricky Business
… “Now, take out a pencil and paper.  It’s time for a test.  Match the graphics with the tag lines.” 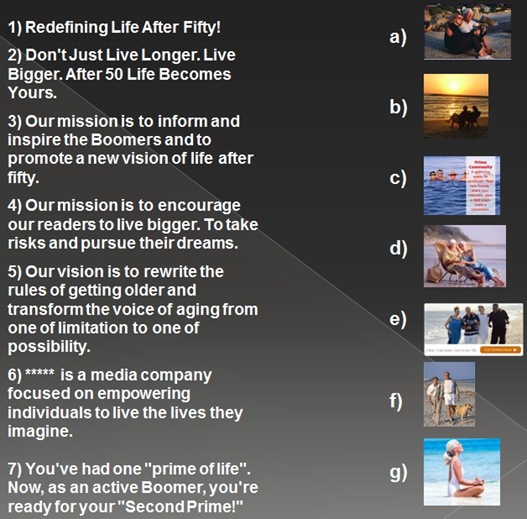 04 November 2013
Smartphones & Tablets, Apples & Oranges
Clients and just about everybody else seem to be confused about advertising on all these new-fangled gadgets.  Added to the mix are odd, stupefying concepts like digital and mobile and native. Most of this stuff is gobbledygook, but I’ll try to separate the chaff from the chaff … 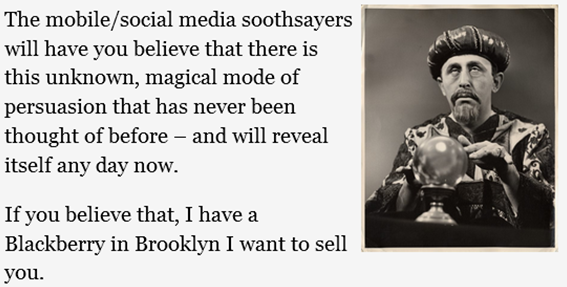 You will now encounter my beaming countenance on
The  Boomer/neXt site (it’ll take a few scrolls):

With offices in Boulder, Colorado, and New York, Boomer/neXt is a national network of age-appropriate professional consultants, communications experts, market researchers and strategists who train brands to re-imagine and re-generate in the 50+ space.

After a few emails and phone chats with Barry Robertson, we agreed that joining forces would be a good idea. So we did it.

He’s put together an impressive collection of hot-shot associates. Hope I can keep up.

Even Another Pointless Press Release

I keep getting them. Hundreds a week. Here’s one from a few months ago:

12 December 2017
Another Pointless Press Release
… What’s not mentioned, not even considered, is that 95% of advertising is targeted to Millennials.  Of course they would be influenced.

Today’s pointless press release (no linking to silliness) has something to do with a book about aging in place and technology.

I opened the email because I’d never heard of this person – and I know most of them. The best: Laurie Orlov and Louis Tenenbaum. You could also check out yours truly:

I clicked the first link in the press release. It sent me to the book’s Amazon.com Kindle page:

This book is currently unavailable because there are significant quality issues with the source file supplied by the publisher.

The publisher has been notified and we will make the book available as soon as we receive a corrected file. As always, we value customer feedback.

Someone probably bought the Kindle book, it was a mess, had technical problems, reported it to Amazon.

If you can’t get it technologically correct, or you hire someone who bollixes the whole thing, do I really want to read what the author has to say about technology?

Just for fun, I clicked on

and the only thing there was the cover of the book.  It should’ve read Look outside …

Do I really want to check out someone who hires a PR firm that is incompetent, one that sends out a press release with a link to something that is an embarrassment to the client?

Deliver us from newfangled flack news. 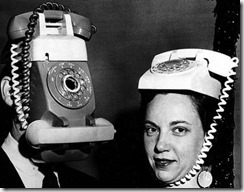 I hate it when I love someone everybody else loves. I feel like I’m just a boring, average, celebrity-obsessed dunderhead.

But I do love Helen Mirren.

Not just lately. I remember her in the 1970s (Oh, Lucky Man!), before long she hid out (from me) doing theatre in England, then popped up again in the 1990s. Ms. Mirren was great in The Madness of King George.

Since then she’s made a few flicks and TV shows.

And is a spokesperson for L’Oreal:

What she did a few days ago knocked me out:

Helen Mirren Praised For Sharing Makeup-Free Photo Taken Before Oscars Glam Squad Got To Work
“I’m not setting standards for others. All I can do is be who I am. I’ve always loved makeup,” she said, according to The Telegraph. 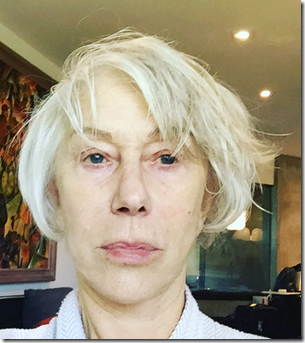 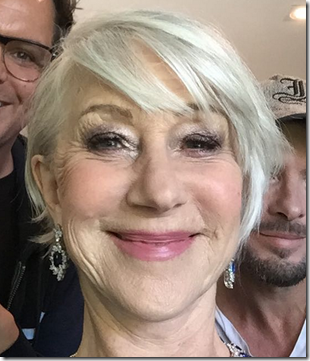 Did I get suckered into thinking she just ‘did it’ on Instagram – or was this a L’Oreal publicity stunt?

I don’t care. Love is unconditional.