Social Media: A Sliver Of The Bigger Picture

You Attended Social Media Week And Didn't Even Know It

Or maybe he wasn’t there. I’m not sure. Actually, it would be better if he hadn’t attended – because that’s Mr. Baskin’s point:

Though you may not have participated in an official event during Social Media Week (which ends today), you attended it…every day, in fact, which is the problem with the gig in particular, and our understanding of social media generally.

All of this makes perfect sense of you’re a social media guru.  Here’s one who ‘gets’ it:

Even more from Jonathan Salem Baskin:

See you at the next Social Media Week event!  (I won’t be there.)

Want To Check Out Fast? Get Behind Me.

Old chum Dick Stroud is annoyed by old people in cashier queues: "Why do young people swap checkout lines when they see an older person in front of them? Well I have to be honest, so do I…”

AARP is touting a simple-to-use tablet: 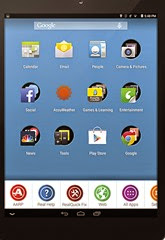 … the nation’s largest advocate for 76 million baby boomers, today announced RealPad, a first of its kind tablet device built to address the specific needs of 70 million Americans 50+ who are yet to fully embrace tablet technology to help them stay connected.

I’m not sure there are 70 million people over fifty who are tech-shy – but there are a lot.

So there may be a bit of room for AARP’s offering.

The problem for me is the idea of a simplified tablet.  Tablets are already simple compared to smartphones, laptops, desktops.

I use Windows, have a Windows phone. I’ve fiddled with Android and iPhones.  It took me awhile to grasp the software, hierarchies.

But I’ve also fiddled with iPads and Android-based tablets. They’re a cinch to use.  Just pick one up and start poking and swiping.  No real learning curve.

We have an Android tablet. I can’t imagine anything simpler. I have a tougher time figuring out the garage door opener.

Check out the accessories page. All simple procedures for implementing extras/apps are pretty much the same as on standard tablets. Nothing special here. And if you know what memory, microUSB 2.0 ports, microSD drives and Bluetooth are – then you can’t be a complete tech idiot.  If you were a complete tech idiot, then this page would be gobbledygook, and probably scare the hell out of you.

No doubt RealPad is a good product. The specs look fine. The price is fine. I worry about what it doesn’t have that apparently makes it a simpler tablet.  I honestly can’t figure it out. If there are things missing, they’d better tell me.

Tablets are getting cheaper.  One major manufacturer will soon be offering a full-fledged Windows tablet for $120.00 – with almost the same specs as RealPad.

Perhaps RealPad should reposition as a very good inexpensive tablet with an easy-on-the-eyes interface (implied: for older eyes).  Not as a dumbed-down product for grizzled tech neophytes.


Dick Stroud’s musings on the subject (not much different than mine, in fact he may have a solid case for plagiarism):

Tablets for oldies - Breezie and now RealPad - all doomed to failure?

An Idle Mind Is the Devil's Playground
Here's a novel concept: Doing nothing is as productive, maybe more productive, as doing something.