Marketing Guru Dick Stroud has some great takes on a video and article – both about tackling simplicity in tech design:

Tuesday, March 29, 2016
"A lot of our technology is bad at humans" - the older the human the worse it gets
… Much of the video illustrates, unintentionally, why designers get it so wrong. Terms like pretentious, elitist and self-satisfied come to mind…

Why does talking about simplicity need to be so complicated and convoluted?  When I talk about Universal Design, Product Design, Packaging, Web Design and older eyes, ears, hands – my message has always been simple:

The Age-Friendly Tool or AF Tool

It analyzes the often dicey and always delicate relationships between marketing touchpoints and the physiological aspects of aging consumers:

We live in a world designed by younger people, for younger people. That’s not a criticism, it’s a fact. But there are already over 1.5 billion people over 50 years of age and in many developed countries this means around 4 out of every 10 citizens.

A three-minute video about the AF Tool:

And check out the press release for more info and links:

Advertising In The Aging Society: The Foreword, The Interview 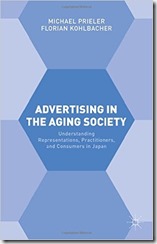 21 February 2016
Published: Advertising in the Aging Society by Prieler, Kohlbacher

While composing the Afterword for Advertising in the Aging Society, I had most of the chapter drafts and resource materials to work with.

After turning in my 1st Draft, Florian Kohlbacher sent me this:

Btw, Dave is writing the Foreword so good that you’re quoting him…

That would be Dave McCaughan, Marketing Thought Leader and Storyteller based in Hong Kong.  He’d penned an excellent piece in Research World titled Aging Asia, and I’d pulled a few quotes for the Afterword – not knowing he’d written the Foreword.

But the frustration remains. Perhaps best summed up by my friend Toru Shibata, ex-president of Johnson & Johnson Consumer Japan, who complains that it is so difficult to talk to his market research suppliers, his advertising agencies, his own marketing departments about targeting 70-year-olds when they are all staffed by people in their 30s and 40s. To those “young” professionals talk of advertising to a 70-year-old seems like talking about their grandmother, or great- grandmother. A beloved relative but a boring and misunderstood target audience.

Will you still need me? Marketing to Seniors: An Interview with Professor Florian Kohlbacher

More about Advertising In The Aging Society by Michael Prieler and Florian Kohlbacher: