This is the stuff I rail about when consulting or presenting - a youth sensibility when your target market is supposed to be over fifty:

… to increasingly vocal critics, the ad campaign is strategically clumsy and a possible threat to the well-being of the state's $5.1 billion tourism industry. In other words, while the ads may yield a chuckle or two, the joke is on New Mexico …

… Dale Lockett, president of the state's largest convention and visitors bureau in Albuquerque, addressed the issue at a statewide conference last month … At a keynote luncheon, Lockett told the creators of the ads ... that their handiwork, while innovative, appeals to the wrong audience. Why, Lockett wondered, was the state targeting its centerpiece ad campaign to a younger crowd at the precise moment when the bulk of baby boomers nationwide are reaching the age when they have time and money to travel?

Or maybe I've seen just one too many commercials in my life. I'm jaded. I think this one's dull and unoriginal. Aliens instead of Cavemen yakking it up as if they're just average joes. 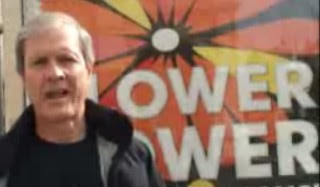 My colleague and great friend Brent Green brought along his video camera for our European Tour - and ended up making a fun, informative video about it.

Being the magnanimous fellow he is, in my mailbox the other day I found a small package from him. He'd tossed the takes of Yours Truly onto a CD.

Yesterday I cobbled together a video using Microsoft Movie Maker - so don't expect too much. It's simply a promotional tool for speaking gigs - to complement this. I purposely made it teasing - not giving much away: 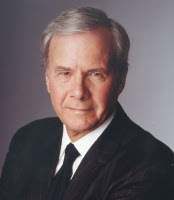 Tom Brokaw always made the news go down easy. Even uncomfortable clumps. Nothing was ever too prickly, made you bleed or gag.

So goes Boom! - a book about his experiences in (more or less) the 1960s. Mr. Brokaw was around a lot of influential folk from all over the cultural and political map. Most of it is insider stuff and fun to read. Early in his career he covered what is arguably the most important movement of the decade - Civil Rights - and his points of view and personal profiles of the individuals he knew were for me the most interesting and vital chapters. 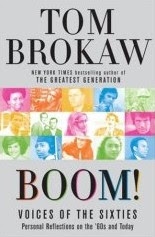 Brokaw comes pretty close to defining the 'generation' (or at least the era that he's covering) the same way I do. As I state in the intro to this blog - it's a diverse, unwieldy group. After reading Boom! you'll consider that an understatement.

Boom! has been criticized for leaning too much on the remembrances and evaluations of famous and influential people - but those were the people Mr. Brokaw knew. It's what I expected. After all, the subtitle is Personal Reflections on The Sixties and Today. Perhaps the problem is that Boom! is being perceived and/or touted as the book about the 1960s. Of course it's not. It's one of many, with many more to come.

The more you know about your target market, the better. So I'll recommend Boom! to anybody interested in advertising and marketing to Baby Boomers - along with Len Steinhorn's The Greater Generation: In Defense of The Baby Boom Legacy. (And there are dozens of others.)

On a website promoting a book I haven't read but should (Encore by Mark Freedman) is an interview with an author of a book I have read:

It turns out the baby boomers who wanted to change the world in the '60s may not be the same ones who will change the world in their 60s. It is the persistent experimenters who are coming to the fore in the second half of their lives, and are emerging from the shadow of the fiery radicals and bold activists who defined the baby boomers four decades ago. Same generation, but different kinds of people.

I blogged about this book over a year ago. It parallels much of what I say in my not-so-brief A Brief History of Advertising Creatives section I usually include in my presentations. Most people are shocked when I explain to them (with loads of examples) that many, many of the great creatives did their best work later in life.

Will the advertising industry change their ways in order to reach Baby Boomers more effectively? Who knows. If they don't, it'll be the clients who will suffer.

Again, I'll leave you with a quote from Rosser Reeves:

"No, I don't think a 68-year-old copywriter can write with the kids. That he's as creative. That he's as fresh. But he may be a better surgeon. His ad may not be quite as fresh and glowing as the Madison Ave. fraternity would like to see it be, and yet he might write an ad that will produce five times the sales. And that's the name of the game, isn't it?"

An In-Depth Interview With Jann Wenner

BW: Do you worry about the future of magazines as a medium? 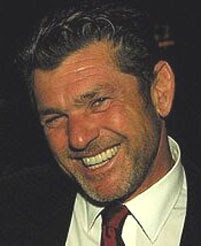 JW: No. Reading is not going away. There are things that magazines do better than other mediums and you just have to do that and do it better than ever. There are so many media choices out there now in the world-Internet, other magazines, blah blah blah blah--that if you don't do a really, really good job, if you're just half-assed, why bother? The audience is just gonna wander away. If you do it really well, you hold onto the audience and you build real value. It has to be meaningful. It can't be casual [expletive]. It has to be meaningful, in some way, in peoples' lives and do things that magazines do really well, [like] photography and editing. I've seen so many magazines trying to imitate Web sites in their redesigns, of doing all these little bits and pieces, and it's like, if you do it correctly, and you can broaden the depth of the experience. That’s what you can bring to peoples’ lives, beyond what’s on the printed page--if you do it correctly ...

The above reflects a lot of what I've been saying about magazines for Baby Boomers - along with how to position them on the racks and on the web.

And if Mr. Wenner is correct, we probably won't be seeing anything like the emergence of a Rolling Stone - meaning, a grass-roots magazine - ever:

JW: It is very, very tough. Tougher than ever. If you were to start a new [successful] magazine today, you'd have to have the backing of major publishing company. Have there been any? Other than little tiny things?

Playing Catch-Up & A Couple of Spots 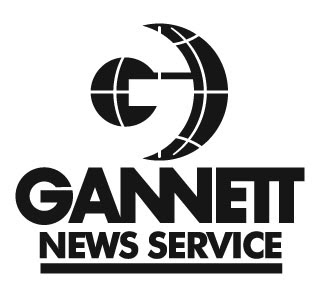 Weird to see stuff I’ve been saying for years – in my book and in my blog – being passed off as ‘news’ by Gannett:

Two TV spots getting a lot of press:

Dylan’s Cad commercial is, as you might guess, an oddball one. I don’t mind it because it’s not pandering or nostalgic. It’s Ol’ Bob today – embedded with new(er) music. Sure, the spot harkens back to one of his great pieces (directed by D.A. Pennebaker) – but it’s not junky like this. And he’s promoting his radio show. Smart guy.

People are arguing about whether Mr. Dylan has ‘sold out’. In fact, for the last forty-odd years any time he’s done anything that’s always been the main question. It’s a major, major concern among many. However, being in advertising, I often worry about the products. Did Fender (electric) Guitars sell out by letting Bob play one?

And Geico’s Chatty Cathy is just funny, clever - not nostalgia for nostalgia’s sake.