Not that it matters or anything’s changed – but surprise, surprise: Baby Boomers are decamping that most famous of digital digs.

Inside Facebook
Fewer Users Over 55 Coming Back … the number of active users over 55 actually decreased by over 650,000 … In other words, users over 55 who joined the site earlier this year haven’t been coming back as much in April and May … 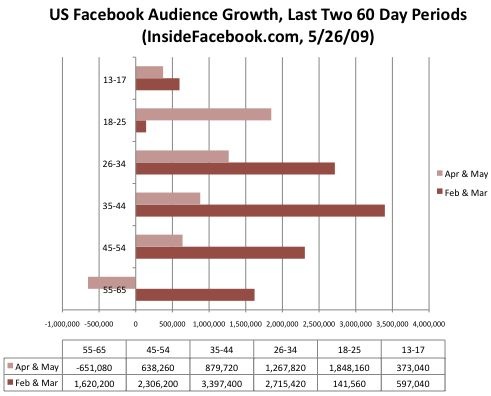 Why it happened, why it doesn’t matter to marketers and advertisers:

Is roiling ether the best place for advertising?
The big buzz phrase today is social networking.  Because Boomers are worried about their work-related competencies, all of a sudden they’re diving into Facebook, LinkedIn, are Twittering, etc. to find out about it all and make connections.

Snake Oil In Cyberspace
As far as Boomers being tech/web Luddites - I’ve been dispelling that silly myth for years - in my book and blog (Advertising to Baby Boomers, first published in early 2005).

But monetizing social networking sites … well, they still haven’t been able to do that with the Millennial and Gen Y demos. What makes anybody think you can do it with Boomers?