Eric Spiegelman emailed a few months ago to tell me about Old Jews Telling Jokes, an upcoming collection of videos starring non-stars – which, of course, is the perfect zeitgeist for the web.  Now it’s up. 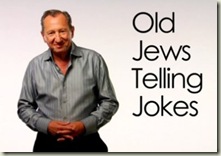 OJTJ is a bunch of folks in their  sixties and seventies who vacationed in the Catskills when they were kids and young adults – and fondly remember the great Borscht Belt comedians and their brilliant jokes.

What’s special about it all: After they tell a joke, these non-professionals are rather shocked and embarrassed by the huge roars from the off-screen audience.  The concept is even funnier because the jokes are usually off-color.  It’s a touching combination of raunch and innocence.  Very human:

There are a few more on the site – and new ones should show up twice a week.