As founder of the “thinking firm” [part think tank and part consulting firm] called Age Lessons, Kennedy has become an acknowledged authority on multi-generational issues and an advocate for mature consumers.

We met in Chicago, worked together in New York City. 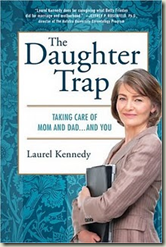 Laurel sent me a copy of her new book The Daughter Trap: Taking Care of Mom and Dad...and You.

I’m not exactly the target market for this tome, what with being male and both parents gone.  So a straight-ahead review of the book might be suspect.

I’ll say this: Ms. Kennedy knows how to write and keep you reading, is quite adept at coordinating intriguing stories that roll like waves and eventually engulf you, is wonderful at interweaving anecdotal and statistical evidence while making her points forcefully:

Researcher Kennedy conducted 60 minute depth phone interviews across the U.S. with a nationally-representative sample of 216 working women born between 1946-1964, who reported having primary caregiving responsibility for one or more aging parents or in-laws.

Since I’m not reviewing the book …

The chapter getting the most press is about sibling rivalry (Laurel really hit a nerve with that one):

Mom's favoritism can affect kids, sibling rivalry as adults
Kennedy … found that even though none of her questions asked directly about a parent favoring one child over another, about two-thirds of the women said there was a favored child, and most said it was "mother-focused."

Ms. Kennedy covers all relevant topics in her book and website.  I’ll toss in my 2¢ on one – corporate sponsorship …

This will sound a bit jaded and opportunistic - but as we know, companies do not like to associate themselves with depressing subjects – in this case, old and helpless people.  However, what an appreciated relief it would be for a couple of major outfits to acknowledge and support caregivers. It’s perfect PR. You don’t have to focus on the ‘caregiving’ – but on the difficult issues facing caregivers – a strong, resilient bunch (because they have to be).  Grab your PR folks, get in touch with Laurel, and there are limitless possibilities.

A good take on it by Dick Stroud.

There are a handful of articles about caregiving on the site – but wouldn’t it be a real coup to add another vertical and title it Caregiving Goes Strong?  (Actually, I’d prefer Caregivers Go Strong to focus on the people, not the act of caregiving.)

What great PR it would be.  You’d make 40 million friends.