The King of Madison Avenue 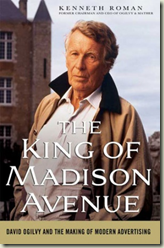 Famous for his colorful personality and formidable intellect, David Ogilvy left an indelible mark on the advertising world, transforming it into a dynamic industry full of passionate, creative individuals. This first-ever biography traces Ogilvy’s remarkable life, from his short-lived college education and undercover work during World War II to his many successful years in New York advertising.

Depending on the audience and venue, I often include a section in my presentations about the history of advertising. A slide (and it’s not the only one featuring Mr. Ogilvy): 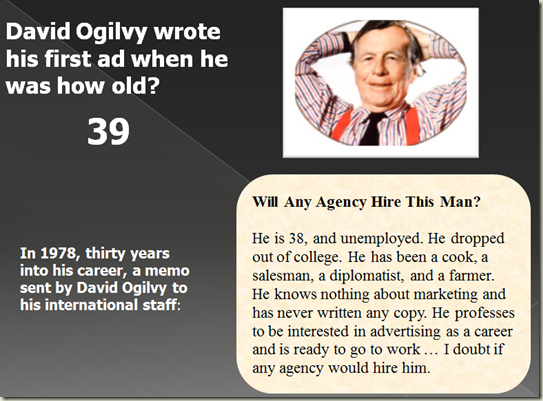 Two pulls from The King of Madison Avenue:

“Look inside the agency. Nobody’s too young for that and, I hasten to add, nobody’s too old for it, either. Why do we have this odious habit of putting all our old people out to pasture when they’re still young…?”

(Jerry) Della Femina remembered hearing Ogilvy railing against young upstarts in the business and the inmates taking over the asylum. “He said it so brilliantly and so well that I got up and led the applause. Then I realized he was talking about me.”