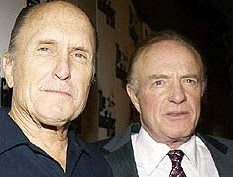 James Caan, Robert Duvall, and a few others are putting together Boomer Films – ostensibly to produce films for Baby Boomers:

Boomer Films, created by Caan, 66, hopes to break the stranglehold of big-studio blockbusters such as Spiderman and Pirates of the Caribbean. Helped by an older generation of filmmakers, the company wants to produce movies based on powerful stories that are less reliant on explicit sex and violence.

Colleague Dick Stroud isn’t so sure about it. I’m not sure – but it doesn’t sound like the worst of ideas.

Actually, my feeling back in the 1970s was that the “stranglehold of big-studio blockbusters” was alive and well, what with The Poseidon Adventure, The Exorcist, The Towering Inferno, Jaws and the like. The Godfather (I&II) were exceptions to the rule. Most of the fondly remembered films made by folks like Martin Scorcese, Robert Altman, Woody Allen and others weren’t super-duper, rooter-tooter blockbusters. But I do admit – there were more of them then than now. And unless my memory has completely moldered, I vaguely recall loads of "explicit sex and violence" back then - although the stories were, more often than not, complex and powerful.

In the 1st Edition of Advertising to Baby Boomers (also included in the new edition) there is a chapter about bringing back creatives from that era to help fashion television/video web campaigns. You can read it on The Advertising Educational Foundation web site (click the link to download the PDF). Considering the cross-pollination between Film/TV and Advertising, perhaps Mr. Caan’s idea might be a creative shot in the arm for all media industries.
Posted by Chuck Nyren at 6/25/2007