UD, Aging in Place, and My Dumb Noggin

Wesley Hein at LifeTwo.com has a good piece about universal design and aging in place:

In the post war years, the big market was in small affordable homes that could be bought on a GI bill and were suitable for raising a family. Sixty years later, the children of those GI's are looking ahead a few decades and don't want to be moved into a retirement community.

And he points you to a good piece by June Fletcher of the Wall Street Journal:

Traditionally, the market for these products has been the elderly and handicapped, but builders and manufacturers see a bigger prize: middle-aged homeowners who don't need them yet. The beleaguered housing industry is hoping it can attract these buyers with more stylish, less institutional fare such as "smart" kitchen faucets and dishwashers …

I’ve written a bunch of stuff about UD and Aging in Place: 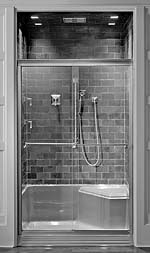 And Rolling Rains commented on one of my pieces.

But, like the typical Baby Boomer, I’ll probably wait until I slip in the bathtub and crack my dumb noggin before I get the hint to do some retrofitting.
Posted by Chuck Nyren at 6/23/2007