The Newsweek cover story this week is about leading-edge Baby Boomers hitting sixty. It's good - although I could've done without the stupid quiz. 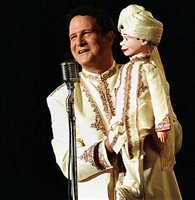 The Albert Brooks piece had me gagging up my coffee, I was laughing so hard. It's a tongue-in-cheek rant about the ad industry — reminds me of a major theme in my book (hire new and used Baby Boomer creatives because the you-know-whos are screwing it up), along with trenchant comments in Brent Green's book (the dumb use of music):

Recently I have been embarrassed to be part of this generation. The reason? Madison Avenue. Madison Avenue is never wrong. They're the neighbor across the street that sees you in the way you don't see yourself. They're young, they're cocky, and what they say about the older generation becomes the truth. People still think there was a real Mr. Whipple, so I know whatever Madison Avenue says about us is what everyone's going to believe anyway.

A few days ago I wrote one of my wacky little pieces because an editor for a magazine targeting the aging industry wanted something from me. But he rejected it. Funny thing is, in my article I answered the main question in the cover story, and in Newsweek's Podcast (at least through the prism of marketing/advertising).