Megan Kamerick's article on Bankrate.com, Boomers push interest in Universal Design homes, is worth a read:

"The idea is simple: a home that is accommodating and convenient to all users at all stages of life. Universal Design principles have been around since the 1970s when the phrase was coined by architect Ronald Mace, who became director of the Center for Universal Design at The University of North Carolina." 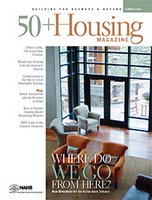 There's nothing much new there for me - but that's probably because I just finished researching and writing an article about UD for The National Association of Homebuilders' 50+Housing Magazine. It's about how to convince Baby Boomers to consider universal design by positioning UD so it doesn't smack of 'old and infirm.'