The Latest WOM On WOMM

Wouldn’t it be nice if this were my last post about WOMM?  I think it will be, since prattle marketing won’t be much of an issue from now on:

The revised Guides also add new examples to illustrate the long standing principle that “material connections” (sometimes payments or free products) between advertisers and endorsers – connections that consumers would not expect – must be disclosed. These examples address what constitutes an endorsement when the message is conveyed by bloggers or other “word-of-mouth” marketers. 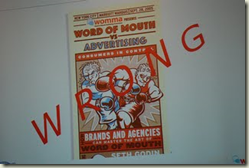 So all these posts over the last few years are now officially fossilized:

The Brouhaha Over WOMM Returns (2007)

Believe it or not, there are more. But those are so fossilized that they yield little DNA.

Is the wisdom of crowds for the gullible?
A lot is made about the importance of word-of-mouth as a means of informing the decisions of older consumers. The connection is often made between WOM and the user generated commentary that litters web sites from delighted or aggrieved purchasers.

And here’s a sly, insightful fellow who seems to gag on WOMM even more than Yours Truly:

It seems like every company in America has a team of squids working furiously to pollute and manipulate the social media environment with crypto-marketing. These slimy creatures are busy...

Social media is becoming so compromised by manipulation, its marketing value is suspect before it even gains traction.

For the umpteenth time on these ethereal pages, a slightly tongue-in-cheek quote from my hardcopy (they used to be called books):

One thing's for sure: You'll never know.