There’s a ‘new’ study with ‘insights’ from two corporate titans:

Boomers and Technology: An Extended Conversation
Author and futurist Michael Rogers examines the attitudes of today's boomers regarding their use of technology, and what they expect in the future.

Let’s see how some of their findings stack up to what NostraChuckus has been prophesying for years:

When it fits their needs, boomers will embrace leading-edge technology …

… they (Baby Boomers) don't consider themselves technology dunces. Instead, they blame manufacturers for excessive complexity and poor instructions.

Technology is a big part of boomer leisure and creativity.

My Favorite Cyber-Myth
How I snicker and roll my eyes whenever I read about Baby Boomers fumbling around on computers, scratching their heads, totally flummoxed.

Boomers are the fastest-growing age segment on such social-networking sites as Facebook, and many log on at least once a day. While not early adopters, they have been drawn in by younger family members and also by business connections.

The big buzz phrase today is social networking.  Because Boomers are worried about their work-related competencies, all of a sudden they’re diving into Facebook, LinkedIn, are Twittering, etc. to find out about it all and make connections.

The clear message of Boomers and Technology is that this generation's technology habits are not frozen in time. Boomers are thoughtful adopters who are open to new technologies that add value to their lives. And the choices they make—the devices, software, and services they embrace—will directly shape what becomes available as the next generation grows older. Boomers today, in short, are inventing the 50-year-old of the future. 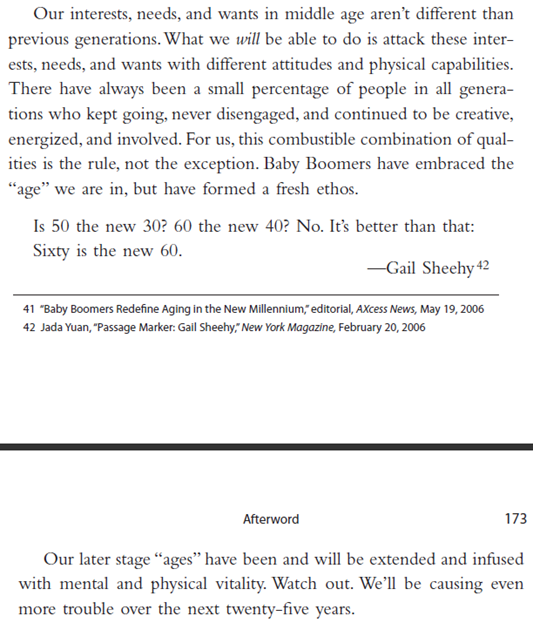 Late Bloomer Boomers
This isn’t like retired people taking on hobbies. The Late Bloomer Boomer Movement is going full blast, and there’s no stopping it. The magic equation: Thirty-odd years of experience plus not feeling old and being relatively healthy plus knowing you have another quarter-century of productivity in you equals . . .

So not much ‘new’ in this study – although there are some startling predictions.

NostraChuckus predicts that in a future post he will predict what they’re probably wrong about.
______