A House Not for Mere Mortals

I’m a huge fan of avant-garde art. I make fun of it sometimes, but that’s because I get a big kick out of it all.

And it’s probably why I actually did ‘get it’ when I read this piece in The New York Times:

A House Not for Mere Mortals
By FRED A. BERNSTEIN 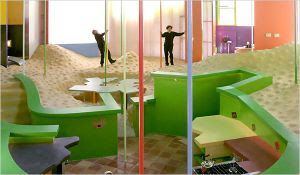 The house is off-limits to children, and adults are asked to sign a waiver when they enter. The main concern is the concrete floor, which rises and falls like the surface of a vast, bumpy chocolate chip cookie … Then Ms. Gins, 66, began holding forth about the health benefits of the house, officially called Bioscleave House (Lifespan Extending Villa). Its architecture makes people use their bodies in unexpected ways to maintain equilibrium, and that, she said, will stimulate their immune systems.

Remember: It’s only Art. I hope, at least.
But the point is well taken. There is a possibility of Universal Designed homes becoming places where you turn to mush. This is the current juicing the popularity of Brain Games – along with exercise routines that value balance and elasticity more than strength and endurance. We’d better deal with these things.

However, I’m not sure I really want to deal with “walls painted, somewhat disorientingly, in about 40 colors;

multiple levels meant to induce the sensation of being in two spaces at once; windows at varying heights; oddly angled light switches and outlets”. It sounds a bit like a cross between a Fun House and The Winchester House.

Sure, we should always be stimulated in varying degrees. But … I’m still sticking with UD meaning Universal Design – not Undulating Danger.
Posted by Chuck Nyren at 4/11/2008