IMMN Webinar, April 15: Boomers From The Inside Out

Presenters will be Dr. John Migliaccio (Director of Research for The MetLife Mature Market Institute) and Yours Truly. 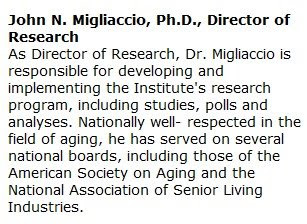 I'll jump into the ethereal spotlight first and rattle on about the brouhaha surrounding word-of-mouth marketing. Then John will reveal a new MetLife study conducted by The Institute for The Future: Boomers From the Inside Out.

John and Chuck have been on the same bill more than once. In fact, twice. And that doesn't include the time we were talking heads on The History Channel series Our Generation. Some have called us the Martin & Lewis of Boomer Bloviating.

Here's more about the webinar.

And a chunk of email I received yesterday:

You guys are a hot ticket! We just sent out the second eBlast and already have 42 people signed up. Since people don't have much of a sense of urgency until the week before a webinar, you can expect many more additional attendees.

Just shows you my pull in the marketing/business world. No doubt John and MetLife are grateful to me for dragging them along on my coattails.
Posted by Chuck Nyren at 4/04/2008