Time to Retire the 'R' Word

Copley News Service columnist Joe Volz had me chuckling with this piece of his:


Time to retire the 'R' word

It's time to retire that infamous "R" word - retirement. At least that's the way it looks to this commentator, who has "retired" and unretired four times … Retirement, by the way, was an irrelevant word for the poor folks who needed to work forever. Now the word is irrelevant for nearly everyone. Many baby boomers, now turning 60, are healthier and want to work forever. Many shift to different kinds of careers … So "retirement" is kind of an inoperative word.

I was saying pretty much the same thing a few years ago:


Contrary to popular myth, Baby Boomers do not believe that they are still teenagers or young adults. (Some probably do, but they need therapy.) Boomers are slyly redefining what it means to be the ages they are. Included in this new definition are some youthful attitudes - but the real change is that instead of winding down, many are winding up. We're not 'looking forward to retirement,' we're looking forward to new lives, new challenges. Only a small percentage will opt for pure retirement. (I predict that in twenty years the word 'retirement' will still be in dictionaries, but followed by the modifier archaic.) 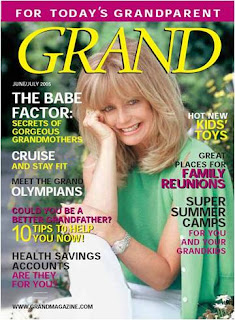 And Joe talks about all those names Baby Boomers (Whoops, there's one!) and everybody else assigns us. A client of mine is GRAND Magazine - and what Joe brings up is a big topic over there:


Even grandparents are trying to rebrand themselves. The Arizona Republic newspaper reports that the image of grandma and grandpa has changed markedly. Actor Will Geer who played Grandpa on the Waltons looked old. Like a grandpa. But blonde bombshell Goldie Hawn has just become a grandma and she calls herself "Glamma."

Joe is having a contest:


Well, let's work on some new vocabulary before some 30-something marketing wizard for a drug company comes up with some cutesy word. Send me your suggestions. Maybe, we can even get the American Society on Aging to change its name.

… Thirtysomething marketing wizards. Yeah, I talk about that subject every so often.
Posted by Chuck Nyren at 8/17/2007