I guess you should first read the blog entry from October '05. That'll set the stage for this entry and links: 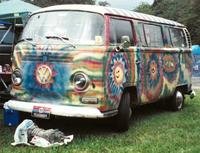 The above has been the most popular (or perhaps most infamous) entry of mine over the last year. I know from my stats that Ameriprise has been all over it. It still gets tons of hits.

Recently, others have been writing about these campaigns. A very good piece by Patrick Somerville for The Simon:

The 1960s were about cultural change and political activism. But in Ameriprise's new commercials, the era's touchstones are evoked in the name of money, money, money.

While I've not seen it (and hope I never do), apparently Fidelity Financial has stooped as low as Ameriprise. Read A '60s Anthem is Sold As Bait by Mark Patinkin of The Providence Journal:

"In-A-Gadda-Da-Vida" is being used to get aging hippies to invest for retirement. It's in a Fidelity commercial. Define irony. I strongly doubt that when a circle of stoned 19-year-olds were passing around a joint with Iron Butterfly on the turntable in 1969, they were weighing wealth-preservation versus growth as they considered the most prudent mix of stocks, bonds and other equity instruments … I find that a bit patronizing. That's how you talk to old people who are, like, I don't know, over 50 or something.

Sometimes I'm speechless. Often it's due to gagging. How grateful I am to others when my throat feels like it's been stuffed with a dry mop.

And Mr. Patinkin hints at one of the cautionary themes in my book:

But someone - probably a 29-year-old ad whiz kid who researched boomer music - figured it was the way to hook us.

Update, 27 April 2006: David Wolfe (Ageless Marketing) is now blogging about the Ameriprise campaigns. As always, his erudite and enlightening comments get your brain roiling:

Ameriprise Doesn't Get It