Thanks to @creatingresults for tweeting this:

A new survey reveals that video has an extraordinarily positive impact on consumers during the purchase life-cycle … video also plays a huge role in further research into the brand, as well as in comparison shopping and in post-purchase information…

I wouldn’t swallow this whole. The info is from two outfits marketing/producing product videos.

Of course, the gold standard for video advertising: 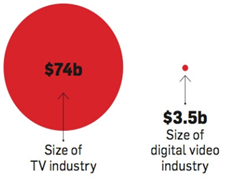 … There’s a Silicon Valley expectation that there will be a desilo-ization of TV imminently, and nobody who took part in these dinners and discussions, not even the most ardent online people, thinks that’s the case…

NostraChuckus, soothsayer for everything obvious, predicted the rise of long(ish) form informational advertising videos way back in 2005:

Download the PDF of two chapters from  Advertising to Baby Boomers, courtesy of The Advertising Educational Foundation.

He didn’t get the delivery systems quite right, but this was before YouTube, smartphones, tablets.  Give him a break. The Crystal Ball of Common Sense was murky.