Picking On The Big Boys & Girls, Part III: Next Avenue

Public Broadcasters to Launch 'Next Avenue(SM)' Multimedia Initiative to Super-Serve and Engage Baby Boomers
$5 million in grants from The Atlantic Philanthropies, the General Mills Foundation and the Medtronic Foundation will support Next Avenue's plans to embrace boomers…

I applauded the idea, but wasn’t thrilled with the way they were promoting it:

I also warned about relying too much on the ‘multiplatform’ concept – not dismissing it altogether but knowing multiplatform is code for web sites, social media, etc.   PBS should concentrate on what they do: Television.

In May, Next Avenue premiered with a bit of ballyhoo – but it’s only a website:

Next Avenue(SM), New PBS System Website, to Be Inspirational and Informative Hub for Booming 50+ Population

There’s some plucked video on the site, and under the Next Avenue umbrella are a handful of PBS/Create TV offerings that have aired for years. 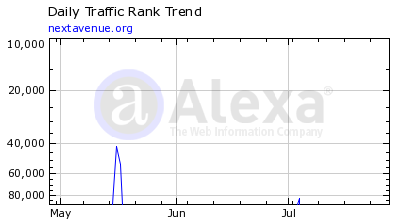 Notice the tiny traffic bump in the beginning of July.  I think this was when PBS began airing promos for the site.

Through the grapevine I’ve heard that it’s been difficult raising money and/or finding underwriters for Next Avenue television projects.  Don’t take my word for it, except my word that it’s a rumor.

Let’s hope the $5 million in grants (promised or wishful thinking?) wasn’t all spent on the website.

More from me, and more from Going Like Sixty.