Something’s simmering in the Twin Cities:

Next Avenue, a new, national public television initiative that will offer comprehensive, multiplatform content designed to super-serve and engage baby boomers, help them navigate a new life stage and unleash their full potential…

Adult Sesame Street to teach how to live

Isn’t it a tad patronizing to assume that Baby Boomers need to be taught how to live and handle their lives?  Just reading that makes me itchy and queasy.

There is a very intelligent series coming out of Twin Cities Public Television: Life Part 2.  I’ve blogged about it, and often use video chunks in my presentations. But I don’t think of Robert Lipsyte as Buffalo Bob hosting an adult Howdy Doody Show. 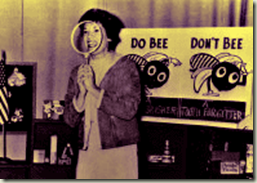 Will they be resurrecting Mr. Do-Bee?

One piece of advice: I wouldn’t get all agog over the concept of multiplatform content by making this project a truly interactive venture. Of course, have a web site (PBS usually produces good ones). Mobile apps? Fine. However, don’t be sidetracked.  Concentrate money and energy where the eyeballs are.

Some ethical questions are considered in this New York Times piece:

Public TV Project Aims to Make Baby Boomers Its Own