As I write this, Mitt Romney’s folks are getting pummeled by pundits for allowing the Obama folks to define Mr. Romney.
Never let the competition define you.  (This is likewise true in more noble pursuits such as advertising.)

Way back in 2008, John McCain’s folks tried to define Barack Obama, pinning the tag “Celebrity” on him to cheapen his image.  That didn’t take, but could have.  Obama’s folks countered with tagging their candidate as a breath of fresh air.  Good for them.

What I find oddly ironic: Today it seems as if the Obama folks have taken their cue from the McCain folks, tagging their candidate as a celebrity: 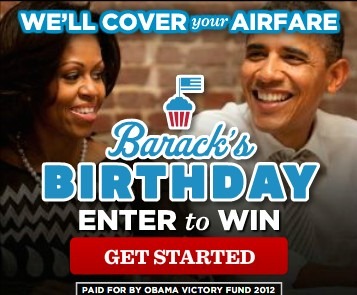 Maybe it’s just yours truly, but this approach gives me the heebie-jeebies.  I don’t want to go to his birthday party.  If I donate money to his campaign, I want it to help his reelection.  Don’t buy me a cupcake with it.

And, it’s all set up sort of like a lottery (or just like a lottery).  Your chance of winning is a million-or-more to one.  That’s a lot of losers. If I donate to Obama’s reelection and ENTER to WIN, I don’t want to end up thinking of myself as a loser.

Baby Boomers’ votes are very important in this election, especially in swing states.  Their concerns, regardless of political leanings, probably don’t include the distribution of cupcakes.
For an excellent overview of the Baby Boomer vote, read Brent Green’s piece in The Huffington Post:

Middle-aged and older adults living in battleground or "swing states" represent 41.90 percent of the population in those states. So the 2012 presidential contest may swing on choices made by undecided Baby Boomers and older voters in just ten states.