I was reading a review of Paul Allen’s memoir:

The Reclusive Other Half of Microsoft’s Odd Couple Breaks His Silence
By Janet Maslin
… It is primarily a book about the advance of technology, and about Mr. Allen’s truly forward-thinking, sometimes staggeringly important innovations… 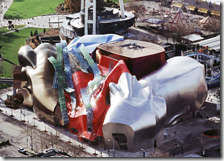 I’ve lived in the Seattle area for more than a decade, have friends (even a relative) working at Microsoft, had a very (very) minor role in Experience Music Project when it opened – so I know something about Mr. Allan.  (My brother once played drums with guitarist Paul – a funny story only the sibling can tell.)

More from the NYT review:

He and Mr. Gates were present for the birth of the desktop personal computer … Now, he says, “here’s what the death knell for the personal computer will sound like: ‘Mainly I use my phone/pad, but I still use my PC to write long e-mails and documents.’ Most people aren’t there yet, but that’s where we’re headed.”

With the exception of the workplace, smartphones (along with iPads and Kindles or something like them) might just make desktops and laptops and the web as we know it obsolete.  If ‘being connected’ mostly means communicating with friends, doing simple search, reading the news - then all that’s really needed is a smartphone.

It’s nice to know that the only thing that separates Yours Truly and Mr. Allan is just a few gazillion dollars.