Ageism Across The Pond

Ageism isn’t like tobacco – homegrown only in The Colonies: 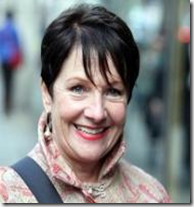 One colleague offered her hair dye. Another told her "it's time for botox." A third said her wrinkles could be a problem in this new era of high-definition TV.

Veteran TV presenter Miriam O'Reilly was eventually taken off air, and she decided to fight back…

Glad they didn’t have HDTV back in the late 18th Century.  Ben F. wouldn’t have been allowed anywhere near a video lens.  And General George in Hi Def?  His handlers would’ve made sure he never smiled.

Abigail Adams? They’d hide her in a closet.