Or we will be soon. Rapped on the knuckles come February:

Never Say Die: The Myth and Marketing of the New Old Age
by Susan Jacoby
Anyone who has not been buried in an underground vault for the past two decades is surely aware of the media blitz touting “the new old age” as a phenomenon that enables people in their sixties, seventies, eighties, nineties and beyond to enjoy rich, full, healthy, adventurous, sexy, financially secure lives that their ancestors could never have imagined. Much of this propaganda is aimed at baby boomers now in their late forties, fifties, and early sixties… 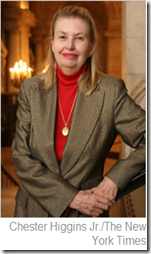 Real Life Among the Old Old
You haven’t experienced cognitive dissonance until you receive a brochure encouraging you to spend thousands of dollars a year for long-term care insurance as you prepare to “defy” old age.

I haven’t read Ms. Jacoby’s book, but my guess is that I’ll agree with chunks of it. I have already. In my book and in a piece I wrote in 1995 – a few themes seem to meld, a few don’t:

Don’t Paint Too Rosy A Picture

A recent article in USA Today asks us to “take a moment to journey forward to 2046, when 79 million baby boomers will be 82 to 100 years old.”[1] A paragraph later, the reporter asks, “So just what kind of America will be forged by this crowd of geriatric goliaths?”

The good news you know: many Baby Boomers will live longer, healthier lives – more so than in any previous generations. The bad news you also know: by 2046 a huge chunk Boomers will have passed on, and another huge chunk will be dealing with acute diseases and afflictions.

The problem is that well-meaning articles in the press like the USA Today piece, along with mountains of 50+ marketing fodder, are setting up Boomers for a psychological fall. There will be a backlash.

Not being a therapist, I won’t diagnose – but if it were beaten into my head over and over that things are going to be just peachy for the next forty years, that my same-aged friends will all be around laughing and cavorting while leading meaningful, vigorous lives—then, shock of shocks, many of us become incapacitated and/or drop and die – I will feel cheated. I will become depressed and disillusioned. It will happen even if I’m one of the ‘lucky’ healthy ones. 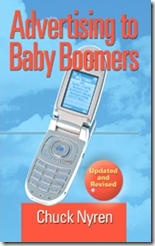 Ask today’s 80+ year olds about this or that and you’ll probably find that many are surprised (but relatively pleased) they’re still alive. They believe they’ve beaten the odds, for whatever reasons. Jump twenty-five, thirty years: if the myth of the non-dying, perfectly healthy Baby Boomer persists, folks in the aging industry are going to have millions of very angry octogenarians their hands. They might even blame you for all those false promises.

How should this be dealt with by marketers and advertisers? Contrary to popular myth, Baby Boomers do not believe that they are still teenagers or young adults. (Some probably do, but they need therapy.) Boomers are slyly redefining what it means to be the ages they are. Included in this new definition are some youthful attitudes – but the real change is that instead of winding down, many are winding up. We’re not ‘looking forward to retirement,’ we’re looking forward to new lives, new challenges. Only a small percentage will opt for pure retirement. (I predict that in twenty years the word ‘retirement’ will still be in dictionaries, but followed by the modifier archaic.)

This is all part of redefining what it means to be the ages we are. It may seem to some as pathological, believing and acting as if we’re eighteen or twenty-five – but that’s because pundits and experts suspiciously eyeing this gargantuan, spirited, unwieldy and varied hoard of middle-agers have nothing to compare it to. The only conclusion they can come to: Baby Boomers must a bit daft.

There is a big difference between thinking you are younger than you are – and not thinking that you are old. This ‘night and day’ distinction may confuse many pundits, but it does not confuse most Boomers.

Much of this new, positive attitude about our future has to do with being the beneficiaries of so many fast and furious medical advances. Some we have already taken advantage of, while others are ready and waiting for us – or right around the corner. A good example is joint and hip replacement surgery. The cane industry is in the doldrums, and we’re hoping it will never recover.

Another medical advance (still in its infancy, from what I’ve read) is pain management. This promises Baby Boomers and successive generations freedom from a fear that haunts all as we age.

There has been plenty of press about Baby Boomers and their dread of Alzheimer’s. Not much of a surprise. Alzheimer’s affects many of our parents, we’re caring for them – and nothing frightens us more than not being in control of our own destinies. However, from what I’ve read there may be some breakthroughs within the next twenty years. That’s very good news.

Am I painting too rosy a picture here? Isn’t this something I was railing against in the first few paragraphs?

Yes, but with a big difference. All the examples above have to do with the quality of life – not the quantity.

If I were digging into a marketing/advertising campaign for a client in the aging industry, I would extract as much quality inherent in the product/service – and toss out any (or most) mention of longevity. This would hold true even with basic nutritional and exercise products. A significant chunk of people who eat only healthy foods and exercise regularly die of heart attacks, get cancer, are the victims of all sorts of diseases and afflictions. You can’t fool me.

Nobody can promise you that you’ll live to be a hundred. However, you can (more or less) make a good argument that healthy lifestyles and advances in modern medicine will offer you a quality life after sixty that no preceding generation had ever imagined.

I’m fifty-five. I may die in five, ten, twenty, forty or fifty years. If you promise Baby Boomers longevity, I will know at some point that you are not telling me the truth. However, if you promise me a certain amount of quality if I take advantage of medical advances, lead a healthy lifestyle, and buy and use your products and services – I’ll probably believe you.

And I’ll continue to take your word for it until my dying day.

Thanks to Tony Mariani (Rabbit Ears) for his encouraging words about my 2010 Wrap-Up Presentation.