Marketers Should Be Wary of Playing Up Living Long 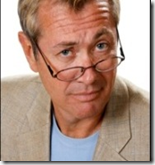 Buzz McClain, a twisted freelance writer and Editor of Selling To Seniors, called me not too long ago. We chatted for a bit, and out popped this:

Marketers Should Be Wary of Playing Up Living Long
Rarely has someone in marketing been as frank as Chuck Nyren. The international creative strategist, consultant, columnist, speaker and award-winning copywriter doesn't hesitate to take the sizzle right out of anyone's seemingly misguided marketing campaign, particularly those aimed at Boomers…

The piece is behind a pay wall, so I’d cause even more trouble if I drilled a hole and sucked out more.

What prompted Buzz to buzz me:

03 January 2011
Uh-oh. We’re in trouble…
The problem is that well-meaning articles in the press like the USA Today piece, along with mountains of 50+ marketing fodder, are setting up Boomers for a psychological fall. There will be a backlash.