Alzheimer's: He won’t be needing them anymore. 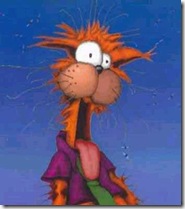 This blog seems to be on a health kick lately. Usually the catalysts for posts are news pieces – so blame the media, not me. I’m as dilapidated and mentally frazzled as I ever was.

There was this recently:

Uh-oh. We’re in trouble…
The good news you know: many Baby Boomers will live longer, healthier lives – more so than in any previous generations. The bad news you also know: by 2046 a huge chunk Boomers will have passed on, and another huge chunk will be dealing with acute diseases and afflictions.

A powerful, poignant piece by Nancy Stearns Bercaw in the NYT:

When All Isn’t Enough to Foil Alzheimer’s
As my father approached middle age he began to experiment on himself, with diet supplements. By age 60 he was taking 78 tablets a day. He tracked down anything that offered the possibility of saving brain cells and killing free radicals: Omega 3s, 6s, 9s; vitamins E and C; ginkgo biloba, rosemary and sage; folic acid; flaxseed.

After retiring from his neurology practice in Naples, Fla., he spent hours a day doing math. Even when I was visiting, he’d sit silently on his leather recliner with a calculator to verify the accuracy of calculations he did by memory.

Very sad.  So be prepared.

Unfortunately, the advertising/marketing industry - along with much of the media - isn’t preparing you.  They are lying to you. From August 2010:

It’s time to cease referencing Alzheimer’s when marketing products and services. There are plenty of valid reasons for eating healthy foods, exercising, or challenging yourself with new mind and body activities. Stop flashing the false hope of staving off a perplexing disease that frightens every Baby Boomer.

While he watched a televised baseball game one afternoon, I walked into his den and eyed the wall of supplements he used to take — bookcase after bookcase of pills with names like Memoral and Sharp Mind. Won’t be needing them anymore.