In 2007 I critiqued some ads for Selling To Seniors.  Pulls from one:

Hearing problems as one gets older have affected humankind for eons. For this recent crop of folks over 50, listening to loud music when they were young has had a negligible effect on their hearing loss. 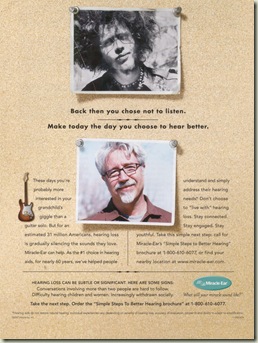 Certainly, a handful of professional rock musicians playing every night for years and years while plopped in front of amplifiers now have some serious hearing problems.

But for 99% of baby boomers, going to a rock concert every so often (even often) has made them deaf? I think not. And even if I’m wrong, why would you want to make your target market feel guilty? Why would you want to beat it over their heads that it’s their fault that they can’t hear their "grandchild’s giggle"?

What about people who did protect their ears, who did "listen" by not listening—and still have hearing loss? This ad makes them feel worse about their predicament. You’re either guilty because you did—or cruelly cheated by fate if you didn’t. While the leading causes of hearing loss are genetic and simply getting older, most studies confirm that everyday life in metropolitan areas is a recent contributor. So lay the blame elsewhere ..

Say what? Baby boomers not losing hearing as much as parents did

By John Fauber
While everyday life may be getting noisier, actual hearing loss from one generation to the next has declined, said Weihai Zhan, lead author of the study, which was published Friday in the American Journal of Epidemiology.

Overall, the baby boomers had 31% less hearing loss than their parents.