I’ve been doing a bit of research about business etiquette and such in a country where I may be hosting a conference/workshop early next year.

Not that I’m going to memorize dozens of customs and trip over myself.  I’m sure they’ll want me to be myself (and that’s what they’ll be getting anyway whether they like it or not).

But some knowledge of cultural etiquette is expected. From what I’ve read, it’s  impolite to point at people – and I might have to wear a tie.  I hope I can remember how to tie one …

One custom intrigued me: When you enter a room full of people you do not know, approach the eldest person first and introduce yourself.

Golly, gee. I spend half my working life trying to convince advertisers to not only introduce themselves to people over fifty – but to actually acknowledge their existence.

We Have Seen The Future, And It Is Old

Have you seen the advertising campaign for Dos Equis beer featuring "The Most Interesting Man in the World?" Each commercial depicts exploits from the "interesting man's" past, or he offers insight on a particular topic …

When I first saw the spot, I thought it was merely a throwback to David Ogilvy’s Hathaway Shirt and Schweppes campaigns: 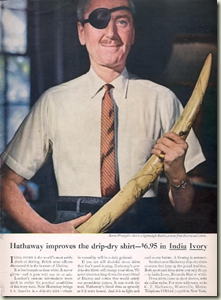 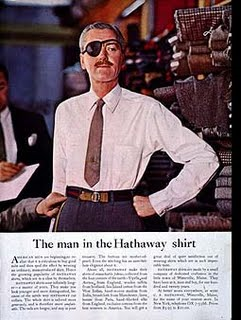 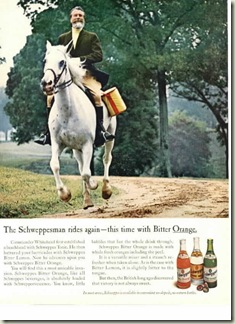 Of course, I’m right.  But Matt makes some good points:

But what's after "cool?" Actually, something even more desirable for those ever-growing-older Boomers: the mantle of wisdom … Boomers will forever transform the role of older people in America. We will be seen as assets -- heroic, wise, visionary, inspirational.

I’ve talked about this, as have others:

Me vs. We Redux Redux 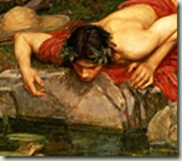 Talk to some folks in their twenties, thirties. They are now in that ‘me’ stage. It’s healthy, smart for them to be so. I was just like them thirty years ago, get a big bang out of them, admire their boundless creativity, energy – and self-obsession. These ‘me generation’ twentysomethings today will become a ‘we generation’ in thirty years.
Page 171, Advertising to Baby Boomers (c) 2004, 2007 by Paramount Market Publishing

From The New York Times:

When older people can no longer remember names at a cocktail party, they tend to think that their brainpower is declining. But a growing number of studies suggest that this assumption is often wrong.

Instead, the research finds, the aging brain is simply taking in more data and trying to sift through a clutter of information, often to its long-term benefit.

I hope Mr. Thornhill and the rest of us are on to something.  Of course, we’ll have to “sift through the clutter” first, and if we’re lucky we’ll come up with something approaching wisdom.

And – if I agree to do this presentation and workshop, I can always buy a clip-on.