In the NYT yesterday:

The Summer of the Celebrity Deaths?
By SARAH KERSHAW

This summer could come to be known as the summer when baby boomers began to turn to the obituary pages first, to face not merely their own mortality or ponder their legacies, but to witness the passing of legends who defined them as a tribe, bequeathing through music, culture, news and politics a kind of generational badge that has begun to fray.

“This is a historical development in cultural history,” said Todd Gitlin, 66, the sociologist and author of “The Sixties,” who teaches at the Columbia University School of Journalism. “It’s the ebbing of figures who have a wide enough span of appreciation and admiration so they appeal to significant numbers of people, like incarnations of virtue. So people take a new measure of themselves when they ask, ‘Will there ever be anybody else like X’ ”?

Going by actuarial tables, the boomers, now age 45 to 63, can expect to live to age 83, thanks to modern health care …

“I think this is the first time so many have simultaneously had an awareness of death and the prospect of a whole new act,” Mr. (Marc) Freedman said. “Never before have there been so many people who have so much experience and the time left to do something with it.”

I don’t think that you should become a copywriter until you’ve done something else first . . . I wrote my first ad when I was 39 . . . I couldn’t have done it unless I had done a lot of other things first . . . I had experience that was enormously important when I sat down to write my first ad.
—David Ogilvy1 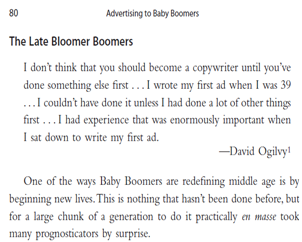 One of the ways Baby Boomers are redefining middle age is by beginning new lives.This is nothing that hasn’t been done before, but for a large chunk of a generation to do it practically en masse took many prognosticators by surprise.

When Baby Boomers were in their late teens through their early thirties there was an explosion of creative productivity in all fields.

Now Boomers in their late forties and fifties, the ones who didn’t quite “make it” or took safer paths, are finding out that their creative juices never dried up. Many of these folks are writing fiction and non-fiction, becoming graphic artists and photographers, and playing and composing music. And just as many are doing astonishingly creative things in the business world, often as entrepreneurs.

This isn’t like retired people taking on hobbies. The Late Bloomer Boomer Movement is going full blast, and there’s no stopping it. The magic equation: Thirty-odd years of experience plus not feeling old and being relatively healthy plus knowing you have another quarter-century of productivity in you equals . . .

Well, we’ll see. Some pundits are predicting that Late Bloomer Boomers may leave a bigger imprint on society than the “early bloomer” Boomers who were at the top of their games twenty-five to thirty-five years ago.
____