Here’s a campaign that (I guess) is age-neutral, maybe skewed a bit to Baby Boomers (two out of three celebrities, and a moldy tune for the TV spot)*: 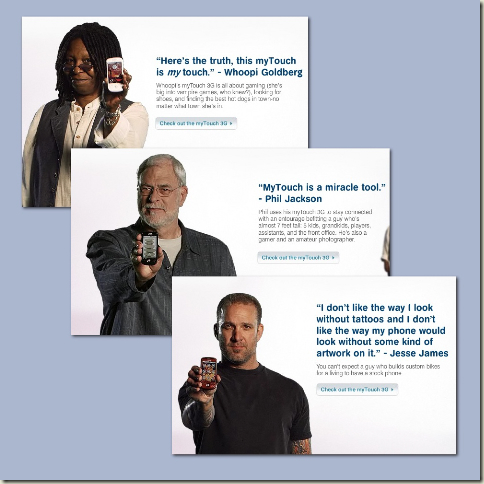 I’m not a fan of using celebrities for ads, although there are exceptions.  I generally smile when I see Whoopi.

The TV spot is aspirational, direct, fun – but it doesn’t do what it should do:

For the umpteenth time …
The Most Effective Marketing/Advertising Model For Reaching Baby Boomers: What is now called traditional advertising pushing you to an age-friendly, informative product/services web site.

It’s not a bad site.

And that hand-me-down soundtrack does everything a soundtrack shouldn’t.  I’ll admit that I’d hoped to never hear that recording again – but even if you liked it way back when, it still doesn’t work:

Purely anecdotal: I’m watching TV. I hear a tune I haven’t heard in thirty-five, forty years. My mind goes off into the ether. “Wow. What a great song. I’d forgotten all about it. I had the album. The cover was blue . . . And there were a bunch of other great songs on that album. What the hell were they? I can’t remember . . . I wonder if I can get it on Amazon. There’s probably only a compilation of his hits, or a boxed set. But I just want the CD of the album. I’ll have to remember to check the next time I’m online ..”

By then, the commercial is over. In fact, probably three other commercials are over. I have no idea what the product is, or what any of the other products are.

If someone at Google or T-Mobile or their ad agency liked this tune so much, spend some money and redo the ditty, so it sounds relevant for today. When I hear that recording while watching the commercial, I think I should be picking up this:

* Thanks to Fast Company for the graphic.