I was looking forward to less pain in the future, hoping the gradual wearing away of gray matter would take a load off my nagging neck. Now I hear otherwise:

Older Brains May Not Be So Small After All Decrease in gray matter isn't a given, researchers find

Scientists have assumed that people's brains shrink as they age, but researchers now suspect that's not the case … Scientists in the past had failed to screen out people whose brains had shrunk because of brain disease, they said.

In other words, simply growing older may not make the brain become smaller. 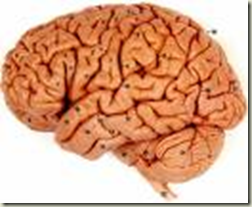 That’s great. That’s all I need. A fully-functioning, fat, juicy noggin and an arthritic neck that can barely hold it up.

Other bad news (especially for advertisers who continue to patronize and dismiss anybody over fifty):

Older Brain May Really Be a Wiser Brain

Baby Boomers are smarter than you think.