New frugality is the new normal

If you’re alive you probably know this already:

New Frugality Is the New Normal, By Necessity
By ASHLEY M. HEHER (AP)

A year after "shop 'til you drop" stopped, the nation fixates on this question: Will consumer spending ever return to pre-recession levels? …

Until the Great Recession, the worst recession since World War II was in 1981-82. Unemployment peaked at 10.8 percent in December 1982, a month after the recession had ended.

The recovery that followed was powered by baby boomers …

The housing bubble mistakenly led boomers and millions of others to believe their home was their retirement nest egg. If they left their home equity alone during the boom, they've taken a hit the last couple years but are still ahead. But many treated their home like a personal bank and spent the gains by tapping a home equity line of credit.

So what should companies and advertising/marketing agencies do?  I wrote about this ten months ago:

So sell them clothes, appliances, computers, toothpaste.  This way you’ll beat the competition.

Just make sure you have the right guts around to trust. 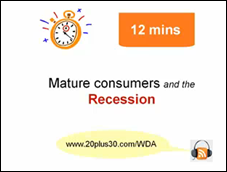