I'm always hesitant to blog about and link to New York Times articles because:

I usually wait a week or so to see if the article is picked up by other news outlets - then link to one of those. But this is such a good one - so here goes:

In a Battle of Toothpastes, It's Information vs. Emotion 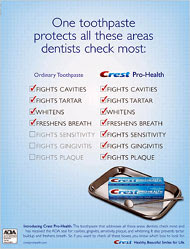 In a bid to regain the sales lead from its rival Colgate-Palmolive, the Procter & Gamble Company has introduced Crest Pro-Health, which claims to deliver in one tube everything a consumer could possibly want in a toothpaste … New advertising for Crest Pro-Health will feature real people who have tried and liked the product. "We've gotten an unprecedented amount of testimonials from consumers," Mr. Barresi said.

Rather than focus on science, the Colgate Total ads with Ms. Shields use glamour and emotion, a shift from the product's previous campaign, which was centered on its germ-fighting prowess.

Information vs. Emotion and a slew of variants have been argued about since the beginning of modern advertising. While I'm perceived as one of those wacky creatives, to be honest I lean a bit towards the information side of things - especially when targeting Baby Boomers. This is probably because I see so many campaigns that try to appeal to Boomers emotionally - and they screw it up so badly that I roll my eyes and say to myself (because no one else is listening), "Just give me the *&(**&#@ facts."

The Colgate Total and Crest Pro-Health campaigns don't necessarily target Baby Boomers - but if they did, I'd put my money on Saatchi & Saatchi's Crest campaign. After all, we're talking about toothpaste. Just give me the facts.

This is sort of a strange approach for Saatchi & Saatchi. They're the 'show me the love' agency - and they go overboard so many times. Then again, they know what to do with Pillsbury and Cheerios. That's what they're good at. So good for them to toss their Lovemarks "Emotion" philosophy out the window for this one.