Newsweek's The Boomer Files can be a bit heavy-handed, and sometimes a bit much - but there are good pieces sprinkled here and there. So far, the Albert Brooks piece is my favorite.

A new one is about television. Marc Peyser writes: 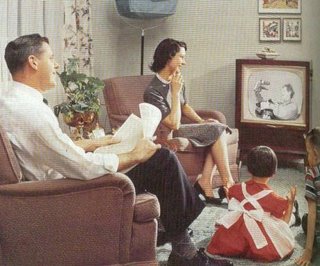 When "Davy Crockett" debuted on ABC in 1954, the show was supposed to be a flop ... Something amazing happened when that first episode aired, however: 40 million people watched. And that was just the beginning. "Crockett" doodads-toy wagons, guitars and, especially, coonskin caps-sold faster than a wild mustang can run. Within a year, the merchandise generated more than $300 million-in today's dollars, about $2 billion.

This echoes "Chuck the Talking Head" on an upcoming History Channel/AARP segment of "Our Generation."

The article does a good job zipping us through television in the 50s, 60s, 70s - and ends up with this insightful conclusion:

If there's an irony to all this - and boomers love their irony - it's that TV today has lost almost all its taste for social commentary … To the degree that TV taught boomers to look thoughtfully at their world, that lesson may be lost. When Archie and Edith sang "Those Were the Days," they were more prescient than anyone knew.