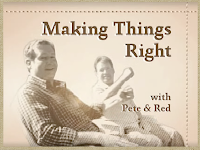 Haggar's 'Making Things Right' campaign has the ad bloggers and others buzzing. People love it, hate it. It's hilarious, it's unfunny, it's original, it's trite, it's homophobic (even homoerotic), it's finally acknowledging middle-age men as men and not wimps, it's socially irresponsible, it's about time someone stood up to lazy kids and faggy neighbors.

Here is a fair mix of reactions. One self-proclaimed 'Dork' actually thinks one spot is a spoof of Haggar ads.

I blogged about these ads a few days ago. Since then, a bunch of people have emailed me. They think I've condoned the ads. I don't condone ads. I comment on them - and my comments are usually confined to whether or not they will resonate with Baby Boomers. Read my original post about this campaign.

One person emailing was a gentleman I met at a business conference last March. He is the former CMO of a major international company, and has served as president of a very prestigious, non-profit organization. Originally, he sent me a link to the Wall Street Journal article. After seeing one spot in the campaign, he wrote:

Have you seen the version where the middle aged guys are throwing their daughter's boyfriends out the window? This one is right on target.

But later in the day he emailed me again:

…Seeing the campaign in its entirety causes me a great deal of concern. Anyone who has dealt with the problems of adolescence can sympathize with some of the emotions. However, much of this is over the top (like the car wash scene) … We must avoid the intergenerational conflict that is on the horizon. If campaigns like this go too far, that will be difficult to avoid.

My personal reaction to the campaign is that it's simply about a couple of frustrated, middle-class white guys being bullies. They've watched one too many episodes of The Sopranos (or the creatives have). The two actors playing Tony Soprano and Tony Soprano are well-cast. Overall, there are a some funny bits and some not so funny bits. I don't find the spots that outrageous, just tongue-in-cheek.

As far as intergenerational conflict, I'm not in disagreement with my friend - but again, I try not to comment on that stuff.

My point in the original post was this: Want to target middle-class, suburban, angry white guys with a wild, controversial, 'talk about' campaign? Fine. This'll probably do it. But if you want to make outlandish, trouble-making, irresponsible commercials that will resonate with Baby Boomers, do a bit of research.

Here is a successful, troublemaking, tongue-in-cheek spot from Australia. It has the sensibility that I'm talking about. This agency did its homework. Baby Boomers are all over the youngest generation. The last thing they want to do is alienate or bully them. They want to nurture them. For better or worse, they think of millennials/grandchildren as their legacy. And they want to 'stir things up.'

Enough pontificating. I'm off to JC Penny to check out these Haggar pants and buy a big baseball bat to carry around the neighborhood so I can intimidate everybody. The campaign says the slacks have a lifetime guarantee - but nowhere does it say if they are stain-resistant to dog crap, or will protect me from getting AIDS from the gay guy down the street.

Maybe that info will be on the labels.