OLPC.  One Laptop Per Child.

I’ve seen some beautiful, profound spots for this project:

But a new one is creepy. Cheesy. As much as I loved John Lennon, love OLPC, would have no problems with using Lennon’s music to promote such a worthy and important cause - this spot is spooky, tin-ear pandering:

It reminds me of a dancing skeleton …

I’m not the only one creeped out by it.

Before there was a Martha Stewart Christmas…

The AARP “Best Employers for Workers Over 50” is an annual recognition program that awards companies and organizations whose best practices and policies for addressing the issues affecting our aging labor force create roadmaps for the workplaces of tomorrow.

Highly admirable, AARP.  Thanks. And congrats to all the companies. By keeping and hiring employees over 50 they’re  doing the right thing and the smart thing.

Quiz: How many advertising agencies are on the list?

Hint: You can count them on the hands of Venus de Milo.

Maybe I’m being a bit rough. After all, many ad agencies are owned by multinationals based outside of the United States – so here is the real AARP award program we should keep our eyes on:

The AARP International Innovative Employer Award is intended to recognize employers who have demonstrated innovative workforce or human resources practices that address issues relevant to the age 50 and older workforce.

Quiz: How many advertising agencies will be on this list?

Anybody want to make a prediction?

Hint: Use the Venus de Milo to make your calculations.
______

Is technology rewiring our brains?

Ignore the Research and Trust Your Gut

Next month Deloitte will release the State of the Media Democracy Survey, Third Edition.

Along with their teaser presentation, a few nuggets have been rolled out in advance.  Two news articles detailing choice ones:

Baby Boomers, ages 43 to 61, and the mature generation, ages 62 to 75, continue to read books, magazines, and newspapers. They lag in adopting new technology. The mature generation puts the most importance on television, favors land lines, and is receptive to print ads.

Nothing much new here.  Lagging in adopting new technology isn’t quite the way I’d put it.  From my book:

Boomers are also receptive to print ads and television spots.  The 2007 Deloitte State of the Media Democracy Survey found that 67% of boomers visited sites after seeing ads on TV or in print.  My guess for 2009: Nothing much will change.

If you take the population as a whole, television remains the most influential ad medium for 88 percent of respondents. Magazines (49 percent) and online (48 percent) tied for second. 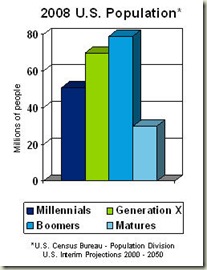 Those percentages are for all age groups – so you can imagine what the numbers would be for Boomers only.

The willingness to pay for a subscription for ad-free content has declined since last year.

Advertising on the web is becoming accepted, often welcomed.

Video on the web:

Most Boomers don’t mind pre-roll.  We’re used to it.  It’s simply a commercial before a show. While overlay ads are intrusive, annoying, and don’t forget this.

I had my virtual hand slapped the other day.

A friend and colleague, someone with a mind-boggling marketing past (Disney, Nestlé, Former President of The Advertising Hall of Fame), reprimanded me for painting all psychiatrists who’ve been on PBS as nutty.

I didn’t quite say that – although my tongue-in-cheek pontifications here in the ether are often misinterpreted. I take the blame for that.  (And take a certain amount of perverse pleasure in it, too.)

My friend/colleague is working on some projects with a gentleman I admire, a psychiatrist who’s been on PBS and many other media outlets, Dr. Gary Small.

I’ve blogged Dr. Small, linked to an article where he was quoted, doing so more than once.

His new book iBrain: Surviving the Technological Alteration of the Modern Mind is getting great reviews.

My friend offered to put me in touch with Dr. Small for an interview – but I wouldn’t do something crazy like waste such an opportunity on a silly blog. If I ever got Dr. Small on the phone I’d turn it into a free personal psychiatric consult.

So instead, watch this: