Actually, everything in this post is old and borrowed.

Has wearable tech had its day?
By Zoe Kleinman Technology reporter, BBC News

This time last year analysts were making multi-billion dollar forecasts for the developers of health trackers and smartwatches … But by November 2016 Smartwatch shipments declined by 51.6% year-on-year …

… Jawbone, once a popular fitness tracker brand, confirmed to TechCrunch that it is leaving the consumer market and focusing on healthcare providers … Microsoft has removed its Fitness Band on its online store … and crucially no longer provides the Band developer kits.

And if you read to the end, they’re still optimistic.

My old and borrowed takes:

By Chuck Nyren
… Along with Google Glasses, you'll also be wearing Google Nose and Google Mouth.

15 OCTOBER 2015
Baby Boomers Not Wearing Wearables
… My guess is that we’re a decade away from wearables we might want to wear. Even then we might not want to wear them.

Industry Arrives at a Consensus on Online Advertising
by Brian Jacobs

… Since the media world exploded and we all started talking digital gobbledegook the BS filter gets clogged, and all sorts of rubbish gets through (and all sorts of good stuff gets blocked) when that happens.

Then there’s the ads. Sad to say they’ve become ludicrously irrelevant, the province of the luddite creatives…

My takes on this are so old and borrowed they’re threadbare: 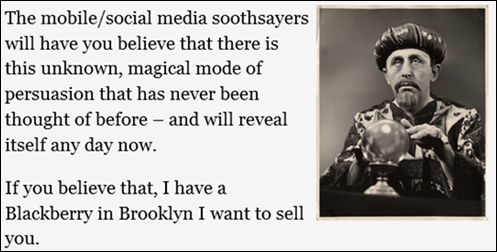 The growing buying power, and lust for life, of the post-war baby boomer generation has led to one of Europe's leading model agencies to launch a new division – RETRO….

… The adverts use Twiggy and three other models of various ages - very age-neutral marketing.

Thanks to Christopher Simpson for telling me about this:

I remember laughing when Draper was pitching a campaign to Lucky Strike around the concept of It's Toasted, Lucky Strike's slogan created in 1917.

Mad Men was either 40 years behind the times or 50 years ahead of it. It may have missed the 1960s altogether.

… As someone who does not have impressive degrees in history or sociology, I was thinking, just off the top of my head, how an eminent scholar (as the author assuredly is) might go about researching and ultimately arriving at the startling conclusion that baby boomers are a generation of sociopaths…