It’s back after a long hiatus.

My thoughts about the show a few years ago:

06 August 2008
Mad Men
… As as a rule I’m not a big soap opera fan – and Mad Men is primetime soap. My guess is that only about a fifth or sixth or less of screen time has anything to do with the wonderful world of advertising. Mostly it’s steamy bubbles.

Not much has changed.  Like I said in a comment attached to the post above, there are fans who love the sets, makeup, hairstyles, costumes – and if something isn’t from the era, or year, or even season of the year – any sort of anachronistic screw-up – they have conniptions. 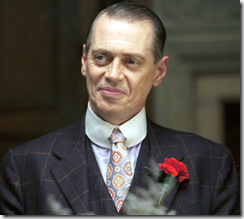 Yet if Don Draper comes up with an advertising slogan like he did for Lucky Strike (“It’s Toasted”) that’s from the 1920s (maybe even earlier) – why, there’s no problem!  No one cares.

Imagine if Don showed up at the office one day dressed like "Nucky" Thompson.  All hell would break loose.

This year has already had its share of suspect scenarios.  I had a tough time believing that very young teenagers would be smoking marijuana backstage (or even in the audience) at any concert, Rolling Stones or Herman’s Hermits.  Sure, in 1968 and after that – but not much earlier.

And I’m completely in the dark as to why SCDP trashes television advertising, with its one-man TV department. While there were specialty agencies that concentrated only on print, most were deeply involved in TV and had large departments dedicated to television and radio.  More often than not, a VP of Programming held more power than all the account execs combined.

If this oversight is ultimately a major factor in the demise of SCDP, it would all make sense. (And if Matthew Weiner steals this idea, I’m hiring Lawrence Preston and suing.)

The Truth Be Known: I watch Mad Men and get a big kick out of it.

(And Roger Sterling tripping was hysterical.  John Slattery should play Timothy Leary in something.)