After The European Speaking/Consulting Tour it was off to London for a good mix of business and pleasure - so much so that it was hard to separate the two. 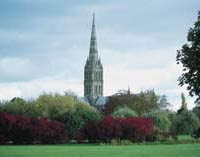 We had a great dinner with Kevin Lavery (Executive Creative Director of Millennium Direct) and his wife at Langan's - and the next day took a train to visit Dick and Stella Stroud in Salisbury (a stunning medieval Cathedral there - and a wonderful town to explore).

Dick often blogs about the Marks & Spencer women's clothing campaigns. (M&S is a department store a bit like Sears and JC Penney). The adverts use Twiggy and three other models of various ages - very age-neutral marketing.

I'll defer to Dick and not critique the various spots, print ads, and web site. They are in his territory (… OK - I like them a lot - but that's all I'll say.) What fascinated me was walking into the store with my more-significant-than-I-am other and watching her riffle through the racks. She turned this way and that, being drawn to items for herself, her teenage daughter, and her twenty-something daughter. It was obvious that all three could shop together practically in the same spot. You wouldn't find the teenager in the 'teen' department and the twenty-something in the 'trendy but adult' department - with the mother not even in the store, but off scrounging around in Chico's or Coldwater Creek.

So I think it all works. While the campaign is whimsical and stylized (whoops, now I'm critiquing), it promotes something that could very well become a reality: many generations of women shopping together in the same clothing section of a department store.