Over a year ago NostraChuckus divined it:

My advertising/marketing predictions and not-technical-because-I’m-not-a-tech-guy recommendations:

Google, of course, is on top of it.  I was goofing around with my blogspot settings, and found one giving you the option of reformatting your  blog for smartphones, making it simple to read (although I’d rather have darker fonts for older eyes).  It looks something like this: 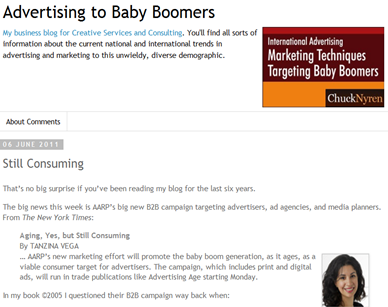 Advertisers with unwieldy consumer-oriented websites (and 99% of websites are unwieldy on a smartphone) had better jump all over this.  Smartphone and Tablet users don’t like having to do the slippery sloppy finger dance when all they want is information.

With the exception of the workplace, smartphones (along with iPads and Kindles or something like them) might just make desktops and laptops and the web as we know it obsolete.  If ‘being connected’ mostly means communicating with friends, doing simple search, reading the news - then all that’s really needed is a smartphone.

And the more people use smartphones, the less they’ll tolerate silly graphical doodads mucking up their small  screens.

And this from Fast Company:

…The proportion of people who access the internet only through mobile devices will grow from 14 million in 2010 to 788 million by 2015. Meanwhile, the number of smart phones will rise from about 500 million today to 2.5 billion.

Now I’m off to see how this post looks on a smartphone.