Imagine the possibilities of J.C. Penney in the future: An iPad enables one shopper to mix and match shirts and slacks without having to undress. A teen sends a mobile photo of a skirt to her father, who pays for it without leaving home by using his smartphone.

Those possibilities have been imagined before… 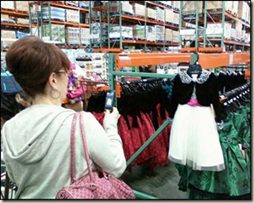 This scenario is played out thousands of times every day around the world - and would make a smart theme for an advertising campaign.