I stumbled upon a blog post. By a fellow I have a lot in common with and who’d probably be a friend of mine if I knew him.

Or we’d hate each other. Who knows.

Larry Jones has written about advertising, Baby Boomers – and you’d better listen because his sentiments are widespread:

All my life I’ve been pummeled by advertising.
I have listened to and watched millions of 60-second spots. Over the years they have changed from live presentations by TV and radio personalities who have tried to cultivate my trust through a sort of pseudo friendship, into ever shorter and “punchier” 30’s, 20’s, 10’s and even five-second commercial messages delivered in MTV-style videos, no scene longer than two seconds, challenging my ability even to see what’s on the screen, much less understand what I think I’m seeing.

I’m not sure he needed the disclaimer. He must have friends like me he didn’t want to piss us off. At least too much. (Hey, Larry - is that a smudge on your sweatshirt or a Nike logo?)

Actually, he was just being nice. Yeah, we’re making a living - but a lot of us also enjoy it. 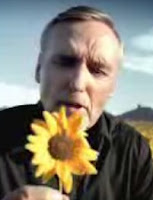 Even though I’d like to see campaigns that resonate with Baby Boomers – and he doesn’t really give a you-know-what – we both agree that they are, for the most part, pretty pathetic.

Larry also has a home studio and plays guitar. With a background in the audio industry, I know a bit about all this. He probably owns some equipment manufactured by a company I worked for seven or eight years ago.

And I was hired because the company knew that the largest age demographic for home audio and music equipment was take-a-guess. Since then, it’s become even a larger chunk.

Does the professional/consumer audio industry have a handle on this? Nope. It’s not a question of dumbing down technology for Baby Boomers (we invented most of this stuff) – but more a question of universal design, easy-to-handle knobs and controls, bigger fonts and correct color contrasts for audio software. Older hands and eyes are at the controls.

Enough. I have to go unwind after tossing up this post. Maybe I’ll plug in and play sloppy, cliché-ridden blues guitar. Even after decades of trying, and I still can’t play as fast as Alvin Lee.