I've picked on AARP's advertising and marketing through the years. I think they can handle it. They're big boys and girls.

It actually started when I wrote my book. It had a beefy chapter about a B2B campaign targeting media planners/buyers:

… The advertising campaign has one ad with ashen-faced Baby Boomers in body bags ("These days, doctors don't pronounce you dead. Marketers do."). Another shows Baby Boomers acting like testosteroned teenagers ("Outta the way, punks: older racers are the hot-rod kings!").Yet another has one of a middle-aged lady dead in a powder room (probably from overdoing it on the dance floor) with police chalk outlining her body. I don't know what the copy is because I haven't seen it. It's probably something like, "Give me wrinkle cream, or give me death!"
© 2005 by Paramount Market Publishing

Last year I tossed up a post about AARP's consumer campaigns.

Here's a recent post about a survey they did three years ago.

And about a year ago I mixed it up with their Chief Brand Officer on NPR.

I won't point you to all my posts that mention AARP and the way they're positioning themselves, doing everything they can think of to seduce Baby Boomers. And I don't always say negative things - but usually do.

I've yet to talk about this cornball catchphrase: Divided We Fail. I may never talk about it - probably because even though I don't have a problem with their objectives, the campaign makes me so ill I'm unable to put blood-drained fingers to keyboard. 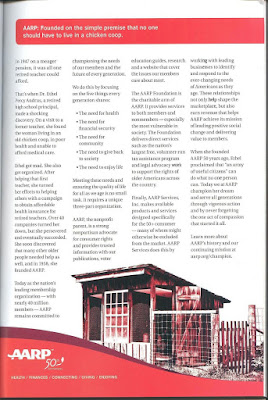 So the other day I'm leafing through the new National Geographic and I see this (click here or click the thumbnail on the right). I get sucked in. Great story. It's something real - not a lot of aspirational vapor.

Call me callous, superficial, jaded, deeply character-flawed, whatever - but my initial reaction was: "Great Branding!" 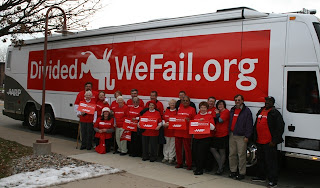 It's how AARP should be positioning themselves - as a proactive, one-on-one, socially conscious organization - not one with dancing gorillas and empty-headed pod people brandishing vapid placards.

Sure, I could be a snot and nitpick - about the copy, the layout, the lede, probably more. But that would be me as a consultant/creative. The essence of this advertisement is spot on. It's a story. A real story.

I hope they develop this ad into a high-profile campaign with more stories and history.

If they do, a huge chunk of Baby Boomers might decide to join for reasons other than simply that 15% Discount Card.

Update May 19, 2008: The National Geographic for June showed up in my mailbox. On the back cover is the "Chicken Coop" ad.

Was there a Chicken Coop Coup? Did NostraChuckus predict the future again? Maybe, maybe not. 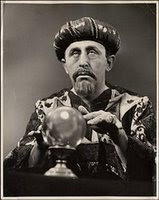 Heretics point out that his prognostication was posted long after said media planning decision was made, while followers counter that he had no prior knowledge of this, and was the only soothsayer able to divine it ...

I'll stay out of the NostraChuckus controversy, and limit my remarks to AARP. I simply say, "Good for them." Finally, smart moves happening over at their advertising/marketing department. (And since it's almost summer, I'm sure they'll be happy to know that they can all shed their gorilla suits now).
Posted by Chuck Nyren at 5/05/2008